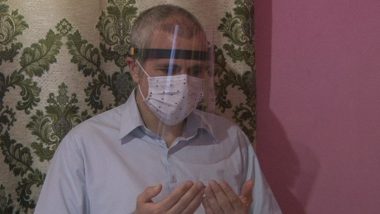 Srinagar, July 27: Former Jammu and Kashmir Chief Minister Omar Abdullah has said he won't contest any assembly elections till the erstwhile state remains a Union Territory. In his article written for The Indian Express on Monday, Omar Abdullah described the removal of Jammu and Kashmir's statehood as "humiliation" of its people and questioned the rationale behind the abrogation of Article 370. Omar Abdullah Demands Release of Mehbooba Mufti as India Goes Under Lockdown Over Coronavirus Outbreak.

"I am very clear that while J&K remains a Union Territory I will not be contesting any Assembly elections. Having been a member of the most empowered Assembly in the land and that, too, as the leader of that Assembly for six years, I simply cannot and will not be a member of a House that has been disempowered the way ours has," Abdullah wrote. The National Conference leader questioned the rationale behind making Jammu and Kashmir a Union Territory. Farooq, Omar Abdullah Move Jammu and Kashmir High Court for Release of 16 NC Leaders Detained Since August 5, 2019.

"Truth be told, the BJP pushing this (removal of Jammu and Kashmir's special status granted under Article 370) wasn’t a complete surprise — it was part of its poll agenda for decades. What came as a shock was the humiliation heaped on the state by downgrading it and splitting it into two Union Territories," Abdullah stated. "To this day, I fail to understand the need for this move, except to punish and humiliate the people of the state," he added.

My piece: “J&K participated in democratic processes,shared in nation’s development but the promise made with it wasn’t kept.Removing 370 may have been the popular thing to do,but going back on a nation’s sovereign commitments was not the right thing to do” https://t.co/VISBMOAgSA

"If the reason for carving out a separate Union Territory for Ladakh was the public demand among the Buddhist population of the area, then the demand for a separate state for the people of Jammu is a much older demand. If the demand was conceded on religious grounds, then it ignored the fact that Leh and Kargil districts, which together make up the Union Territory of Ladakh, are Muslim majority and the people of Kargil are vehemently opposed to the idea of being separated from J&K," Abdullah sought to know.

The former Chief Minister also questioned whether objectives, as stated by the Modi government, behind abrogation of Article 370 were met. He asked: "It was alleged that Article 370 has fuelled separatism and allowed militant violence to thrive in Kashmir, an end was supposed to herald the end of terrorism. If that be the case, then why is it that almost a year later the same Union government is forced to tell the Supreme Court that violence in J&K is increasing?"

"It was also claimed that J&K has remained backward because of Article 370. In fact, a comparison with a “developed” state like Gujarat would show that we compare far more favourably in a number of human development indices," Abdullah wrote. "Finally, it was suggested that Article 370 was always meant to be a temporary provision. What they forget to add to this sentence is that it was temporary because of the little matter of the United Nations Security Council resolution 1947 of 1948, but that’s an entirely different op-ed in itself.

Even the Supreme Court, as recently as 2018, has held that Article 370 “had acquired a permanent status by virtue of its years of existence making its abrogation impossible”," he added. Abdullah projected removal of Jammu and Kashmir's special status as a "betrayal", saying "It was understood that so long as J&K remained a part of India, the special status enjoyed by it would remain... J&K has kept its side of the promise by remaining a part of the Union, the last 30 years of militancy notwithstanding..., but the promise made with it was not kept."

Abdullah concluded his piece, stating that his party will continue to fight against the "injustices" heaped on Jammu and Kashmir in the last one year. Here it may be noted that on August 5 last year, the Modi government revoked Jammu and Kashmir's special status granted under Article 370 and split the erstwhile state into two Union Territories. Scores of political leaders, including Omar Abdullah, were kept in house arrest for months following the "unprecedented" move.

(The above story first appeared on LatestLY on Jul 27, 2020 08:59 AM IST. For more news and updates on politics, world, sports, entertainment and lifestyle, log on to our website latestly.com).