Rahul Gandhi Does a Tit For Tat, Tweets Video Clip of Narendra Modi Saying 'Delhi Has Been Made Rape Capital', Demands Apology From PM For the Speech 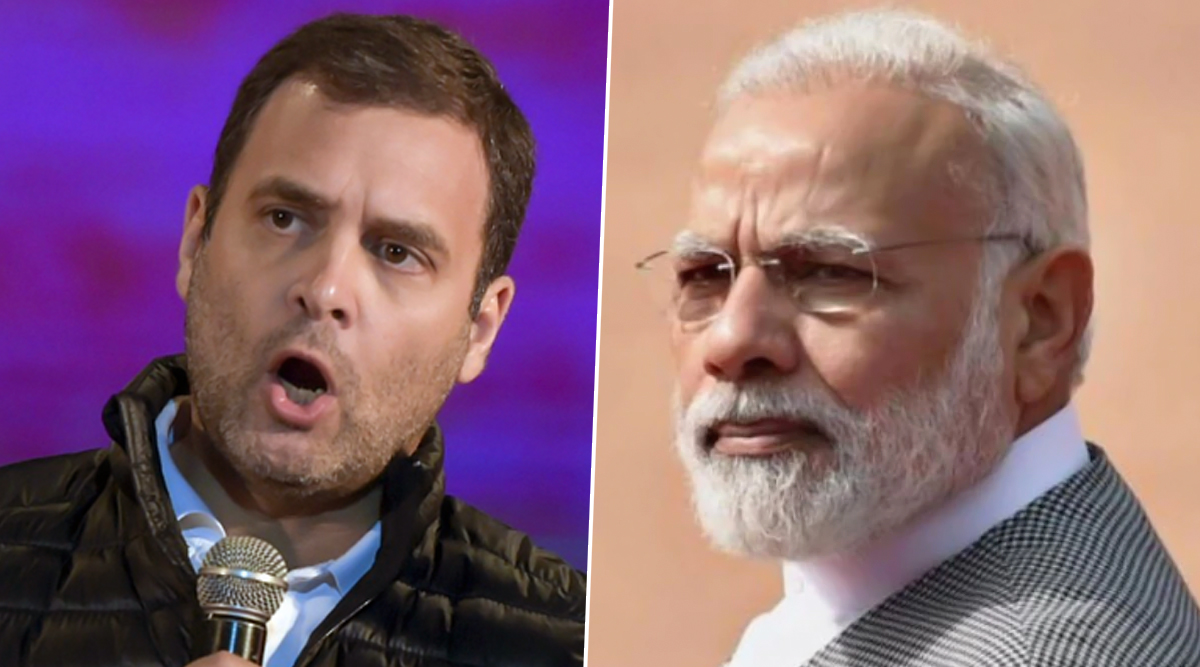 New Delhi, December 13: After a huge uproar in the Lok Sabha over his 'Rape in India' remark, Congress leader Rahul Gandhi shared a video clip of Prime Minister Narendra Modi on Twitter, where the latter can be heard saying in a rally that "Delhi has been made the rape capital." Gandhi also demanded an apology from Prime Minister Narendra Modi over his comments in the video. The former Congress president said that, "Modi should apologise. 1. For burning the North East. 2. For destroying India’s economy. 3. For this speech, a clip of which I'm attaching." Rahul Gandhi Refuses to Apologise After 'Rape In India' Remark Sparks Row in Parliament, Here's the Video of What he Had Said.

The Gandhi scion had earlier said while talking to reporters after the House was adjourned that the BJP's protest against his comment was to divert the attention of the people of country. Rahul Gandhi said that, "I have a video clip of Narendra Modi ji in my mobile where he has called Delhi- the rape capital of the world." The Congress MP from Wayanad also said that, "Narendra Modi and Amit Shah have burnt the North East" in reference to the protests taking place in Assam, Tripura and Meghalaya against the Citizenship Amendment Bill 2019 which was passed on Wednesday night. Rahul Gandhi Reiterates 'Rape Capital' Remark, Targets PM Narendra Modi For His 'Silence'.

Though the exact date and place of Modi's speech is not mentioned in the tweet by Rahul Gandhi, it is clear that the speech was delivered before Narendra Modi became the Prime Minister of India. In the speech, Modi is heard saying in the rally that, "no appropriate law has been made and that no provisions taken to protect women" and says that "Delhi has been made the rape capital."

Watch the Video Shared by Rahul Gandhi in the Tweet Below

1. For burning the North East.

3. For this speech, a clip of which I'm attaching. pic.twitter.com/KgPU8dpmrE

Lok Sabha Speaker Om Birla on Friday adjourned the House sine die at the conclusion of its winter session amid the ruckus over Congress leader Rahul Gandhi's "Rape in India" remark. Union Defence Minister Rajnath Singh said Gandhi does not have the "moral right" to be an MP and sought his apology in Parliament. Union Minister Smriti Irani called Gandhi's statement deplorable and that he should not play politics on rape, asking his mother Congress President Sonia Gandhi to advise and guide him.

"Is he inviting people to rape in India? What does this mean? It is shameful. He should apologise to the people of the country," she thundered. Gandhi made the "Rape in India" statement during a public rally in Jharkhand's Godda district on Thursday when he attacked the Narendra Modi government over rise in crimes against women, saying: "the Prime Minister had launched 'Make in India' but, nowadays, it is 'Rape in India'."