The Disaster Management and Relief Minister said Solanki “betrayed” the party due to which the BJP won Zila Pramukh election in Jaipur. Rathore called the press conference after Solanki on Wednesday called him a “broker” between the Congress and the BJP. 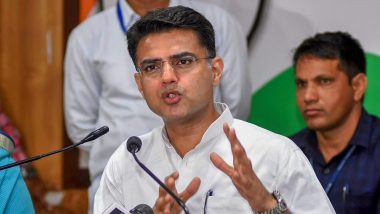 Jaipur, September 29: Rajasthan Congress leader Dharmendra Rathore, who has been sent a notice for ‘indiscipline' by the party leadership, on Thursday accused Sachin Pilot loyalist Ved Prakash Solanki of being a “traitor”, producing a video that purportedly proves this.

Considered close to state Chief Minister Ashok Gehlot, Rathore was served the notice by the AICC for being involved in a parallel meeting held by CM loyalists, opposed to the possibility of Pilot being picked as the state's next CM.

"I will provide proof on who is a traitor and who is loyal. It will come before everyone. Solanki had met BJP president Satish Poonia at a hotel during zila parishad election," Rathore, who is the RTDC chairman, said at a press conference here. He showed a video of Solanki and Poonia purportedly entering a hotel and exiting a hotel room one after the other. Rathore alleged that the two had met to horse-trade Congress members during zila parishad elections. Congress President Election: Ashok Gehlot Backs Out from Party Chief Race in View of Rajasthan Political Crisis.

Speaking at the same press conference, Rajasthan minister Govind Ram Meghwal, who was in-charge for zila parishad election held in 2021, told reporters that he had also complained about MLA Solanki harming the party but Rajasthan in-charge Ajay Maken did not act on it.

The Disaster Management and Relief Minister said Solanki “betrayed” the party due to which the BJP won Zila Pramukh election in Jaipur. Rathore called the press conference after Solanki on Wednesday called him a “broker” between the Congress and the BJP.

Solanki and Rathore are not the only ones targeting each other in the current crisis in the party's Rajasthan unit. Dausa MLA Murari Lal Meena also targeted health minister Parsadi Lal Meena, accusing him of using unparliamentary language for the MLAs who sided with the then deputy chief minister Sachin Pilot in 2020 when he rebelled against Gehlot.

“The way ‘traitor' and unparliamentary language is being used for us, it is bad," the Dausa MLA said. He said the MLAs with Pilot stayed in Delhi for a month in 2020, but did not say a single word about the Congress high command. "We can sit at home, but cannot go with the BJP. We are sad that the word traitor is being used for us, but now it should be told who is betraying the high command?" Murari Lal Meena said.

He also said he is ready to contest mid-term election, if the situation arises.

Pilot loyalists till now have been maintaining a silence over the political developments in the state, triggered by the summoning of the Congress Legislature Party's meeting to discuss a successor to Gehlot in the state.

Parsadi Lal Meena had on Wednesday said that the Rajasthan MLAs can fight the election if the assembly is dissolved, but cannot accept Sachin Pilot as the Chief Minister. “The man who stayed at Amit Shah's residence and sat in BJP's lap, cannot be tolerated as CM,” he had said. Congress President Election: Ashok Gehlot Says 'Will Not Contest, Apologised to Sonia Gandhi for What Happened in Jaipur'.

“It would be better if we resign and be ready to contest elections a year earlier than making such a person the CM," Parsadi Lal Meena had said. Earlier in the week, Congress issued show cause notices to three of his Gehlot's loyalists – Rajasthan ministers Shanti Dhariwal and Mahesh Joshi, and Dharmendra Rathore – for their “grave indiscipline.”

The party's disciplinary committee has asked the three to explain their conduct within 10 days. The action came after several MLAs participated in a parallel meeting at Dhariwal's residence in Jaipur, over the official legislature party meeting convened for passing a resolution authorising the Congress chief to appoint a successor to Gehlot, in case he fought the Congress presidential election.