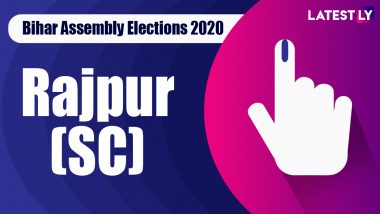 In the 2015 Bihar Assembly election, the Rajpur (SC) constituency was won by Santosh Kumar Nirala of JD (U), and Bishawnath Ram of BJP was the runner-up. The candidates fighting for this seat in Bihar polls 2020 include Ashok Kumar Ram of Bahujan Mukti Party, Vishwanath Ram of Congress Party among others.

(The above story first appeared on LatestLY on Oct 18, 2020 08:50 PM IST. For more news and updates on politics, world, sports, entertainment and lifestyle, log on to our website latestly.com).