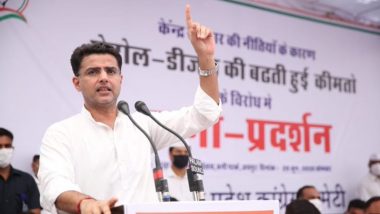 Jaipur, July 13: Moments after the Congress party said its doors are open for all, posters of Rajasthan Deputy Chief Minister Sachin Pilot were pit back outside the state headquarters premise on Monday. Posters of Sachin Pilot, who is the President of Congress's Rajasthan unit, were removed from outside the party office earlier today. This had led to speculations that Congress may remove Pilot and appoint a new chief of the state unit. Sachin Pilot Clears Air, Says 'Not Joining BJP' Amid Tussle With Ashok Gehlot.

Pilot has openly revolted against Chief Minister Ashok Gehlot. On Sunday, he reportedly issued a statement saying he has the support of 30 MLAs and the Ashok Gehlot government is in minority. He then went incommunicado forcing the Congress leadership to rush three leaders - Avinash Pandey, Randeep Surjewala and Ajay Maken - to Jaipur where CM Gehlot called a meeting of all party legislators. Jyotiraditya Scindia Reacts to Rajasthan Congress Crisis, Says 'Sad to See Sachin Pilot Being Sidelined'.

Prior to the meeting on Monday, Congress made a public appeal to Pilot and his loyalists to discuss their grievances with the party. "Pilot should tell us when he will come to attend the CLP (Congress Legislature Party) meeting. We have kept our doors open for Pilot and his MLAs. Sonia Gandhi and Rahul Gandhi are keen to resolve the crisis," Surjewala told reporters in Jaipur. He also said Congress leaders have spoken to Pilot many times.

Meanwhile, the CLP meeting which was supposed to start at 10:30 am has begun at the residence of the Chief Minister. Earlier, Avinash Pandey, Rajasthan congress in-charge, said that disciplinary action will be action against those skipping meeting.

(The above story first appeared on LatestLY on Jul 13, 2020 02:17 PM IST. For more news and updates on politics, world, sports, entertainment and lifestyle, log on to our website latestly.com).