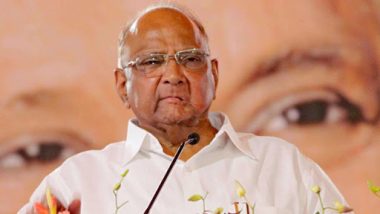 Mumbai, September 15: In potentially controversial statements, Nationalist Congress Party supremo Sharad Pawar has lavished praises on the people of Pakistan and alleged that the ruling BJP is spreading "misinformation". "People here say Pakistanis are facing injustice and are unhappy but that is far from the truth. Such comments are being made only for political gains, without realising the actual situation in Pakistan," Pawar said at a meeting of minority community members at the party office on Saturday evening.

Justifying his contentions, the former Defence Minister pointed out that he had visited Pakistan several times and was always accorded warm hospitality. "Pakistanis are of the belief that even if they can't travel to India to meet their relatives, they treat all Indians as their relatives," Pawar said. Sharad Pawar Appoints Nawab Malik As New Mumbai President of NCP.

He added that attempts are being made by the ruling dispensation to divide people in the name of Pakistan and Islam, minorities are being attacked, but no action is taken against the accused. Pawar called upon the Muslim community in India to come forward and counter these goings-on in the country since progress cannot be achieved without amity and brotherhood among all communities.

The comments came even as political and diplomatic relations between the two nations are at a new low after the abrogation of the Constitution's Article 370 in Jammu and Kashmir.

Political observers say that Pawar's surprising comments - as the countdown to Maharashtra Assembly elections gets underway - may spark a political furore, both with its ally Congress and the ruling BJP-Shiv Sena combined. However, there have been no reactions to Pawar's statement so far.

(The above story first appeared on LatestLY on Sep 15, 2019 09:57 PM IST. For more news and updates on politics, world, sports, entertainment and lifestyle, log on to our website latestly.com).