As the countdown to the 2022 Uttar Pradesh assembly elections begins, more and more parties are announcing their presence in the electoral fray. 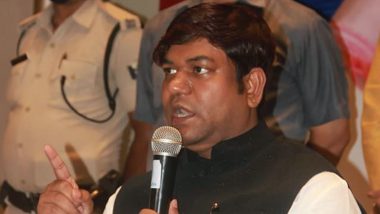 Lucknow, July 4: As the countdown to the 2022 Uttar Pradesh assembly elections begins, more and more parties are announcing their presence in the electoral fray.

The latest to join the bandwagon is the Vikassheel Insaan Party (VIP) led by Bihar minister, Mukesh Sahani. He has announced that his party will contest the upcoming assembly elections in UP. Uttar Pradesh Assembly Elections 2022: Congress Has Capacity to Fight UP Polls Without Alliance with SP or BSP, Says PCC Chief Ajay Kumar Lallu

Sahani is minister of animal husbandry and fish resources in Bihar.

His VIP party has four MLAs in the Bihar assembly.

"Our first preference will be to fight in alliance with the BJP, as our party is part of the NDA, but we are also keeping our options open", said Sahani, who has opened a plush office in Lucknow.

"We have identified around 150 seats in UP where the party can put up candidates. These are seats that have a sizeable Nishad population. In nearly 70 Assembly constituencies, the population of Nishad is over 75,000," he stated.

Incidentally, the VIP shares a common vote bank with the Nishad Party that also claims to be the sole custodian of Nishad votes that constitute about 14 per cent of the OBC group.

Sahani comes from the Nishad (fishermen and boatmen) community, and is making a bid for votes from his community in Uttar Pradesh.

"The party will also observe the death anniversary of slain former bandit queen and former MP Phoolan Devi on July 25 all across UP as part of its focus to mobilise Nishad and other sub-castes in the community," said Sahani.

Phoolan Devi, who belonged to the Nishad community, was killed in New Delhi on July 25, 2001.

Political analysts are of opinion that the BJP may have brought in VIP to counter the Nishad Party, led by Sanjay Nishad, which is demanding the post of deputy chief minister in return for an alliance in the assembly polls.

The Nishad Party has one MLA in the UP assembly and Sanjay Nishad's son Pravin is a BJP MP from Sant Kabir Nagar.

(The above story first appeared on LatestLY on Jul 04, 2021 01:35 PM IST. For more news and updates on politics, world, sports, entertainment and lifestyle, log on to our website latestly.com).