The prominent faces in the fray in this phase are Abbas Ansari and Om Prakash Rajbhar of SBSP, BJP's Neelkanth Tiwari, Shah Alam of AIMIM, and BJP Ally Apna Dal's Sunil Patel. 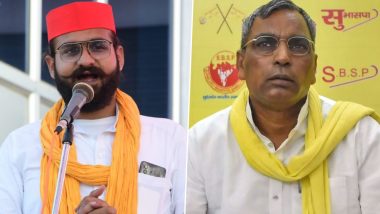 Varanasi, March 5: A total of 54 assembly seats in 9 districts will go under the polls in phase 7 of the Uttar Pradesh Assembly Elections 2022. The voting for the 7th phase of UP polls will be held on March 7, while the results will be declared on March 10. Meanwhile, election campaigns of all parties will end at 5 pm on Sunday.

The nine districts which are undergoing polls in the seventh phase are Azamgarh, Mau, Jaunpur, Ghazipur, Chandauli, Varanasi, Bhadohi, Mirzapur, and Sonbhadra. While Azamgarh, Mau, and Jaunpur are perceived as SP strongholds, the Bharatiya Janata Party enjoys considerable sway in the rest of the districts. The prominent faces in the fray in this phase are Abbas Ansari and Om Prakash Rajbhar of SBSP, BJP's Neelkanth Tiwari, Shah Alam of AIMIM, and BJP Ally Apna Dal's Sunil Patel. Uttar Pradesh Assembly Elections 2022 Dates And Full Schedule: Voting in 7 Phases on Feb 10, 14, 20, 23, 27, March 3, 7; Counting And Results on March 10.

Let's Take a Look at the Key Candidates in Phase 7 of UP Elections:

Apna Dal has a strong grip on the Rohaniya assembly seat. Apna Dal has fielded VP Sunil Patel from Rohaniya. In 2017, BJP’s Surendra Narayan Singh won the seat. Sunil Patel is up against BSP's Arun Singh Patel. Uttar Pradesh Assembly Elections 2022: From Zahoorabad to Mau Sadar, Here Are The Five Key Contests in The Last Phase of UP Polls.

Alambadi Azmi, 86-year-old SP veteran, is contesting from Nizamabad seat. Nizamabad is SP's stronghold, especially with Alambadi Azmi, who has won the seat four times since 1996.

(The above story first appeared on LatestLY on Mar 05, 2022 04:52 PM IST. For more news and updates on politics, world, sports, entertainment and lifestyle, log on to our website latestly.com).