Thousands of people gathered at Ramlila Maidan in Delhi on Sunday for Vishwa Hindu Parishad's rally to press for the construction of Ram Temple in Ayodhya, two days before Parliament's winter session commences. 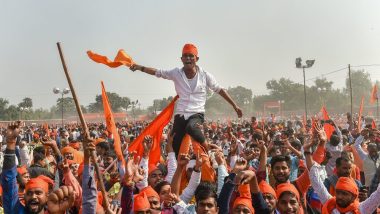 New Delhi, December 9:  RSS’ executive head Suresh ‘Bhaiyyaji’ Joshi, in the maga rally organised by the Vishwa Hindu Parishad in Delhi at the Ramlila ground on Sunday said that bringing in a law is the only way for the construction of Ram temple. Joshi was speaking at the outfit's Dharam Sansad rally. Thousands Gathered at Ramlila Maidan in Delhi for VHP Rally for Ram Mandir in Ayodhya.

The senior RSS functionary said at the event that “We have no conflict with any community, We are not begging but expressing sentiments. Making law is only option for Ram temple. Movement will continue till commitment is fulfilled. ”

Elaborate security arrangements have been made at Ramlila Maidan and snipers have been deployed on high-rises. The VHP has carried out a door-to-door campaign to make the rally a success. The mega rally comes just two days ahead of Winter Session of Parliament. The government has also called an all party meet on December 10, ahead of the Winter session set to begin on December 11. Government Calls for All-Party Meet Ahead of Winter Session of Parliament.

Thousands of people gathered at Ramlila Maidan in Delhi on Sunday for Vishwa Hindu Parishad's rally to press for the construction of Ram Temple in Ayodhya, days before Parliament's winter session commences.

The traffic police has issued an advisory detailing diversions in view of the rally. It said no traffic will be allowed on Ranjeet Singh Flyover (from Guru Nanak Chowk to Barakhambha Road), JLN Marg (from Rajghat to Delhi Gate), Chaman Lal Marg near VIP gate.

(The above story first appeared on LatestLY on Dec 09, 2018 05:01 PM IST. For more news and updates on politics, world, sports, entertainment and lifestyle, log on to our website latestly.com).