West Bengal Assembly Elections 2016: A Look Back at The Polling, Alliances and Results of The Previous Election Ahead of 2021 Polls

Nearly five years ago in 2016, the Trinamool Congress or TMC registered a landslide victory in the state assembly polls. 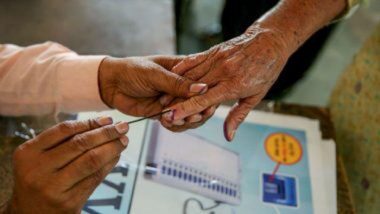 Kolkata, March 3: The assembly elections across West Bengal will be held in eight phases from March 27 to April 29. Voting will take place on March 27, April 1, April 6, April 10, April 17, April 22, April 26 and April 29. The results of the West Bengal assembly elections 2021 will be declared on May 2. Nearly five years ago in 2016, the Trinamool Congress or TMC registered a landslide victory in the state assembly polls and Mamata Banerjee was sworn in as Chief Minister for second consecutive term. West Bengal Assembly Election Results From 1952 to 2016: From Congress to Left And TMC, The Rise And Fall of Political Parties in The State Over The Years.

In 2016, the 294 seats in West Bengal went to polls in seven phases. The first phase was held in Naxalite-Maoist affected Red corridor areas with two polling dates: 4 April and 11 April. The other phases were held on 17, 21, 25, 30 April and 5 May. The result of the election was declared on 19 May. The election saw a triangular contest between the TMC, the Mahajot (alliance of the Left parties and Congess) and the National Democratic Alliance, led by the Bharatiya Janata Party (BJP). West Bengal Assembly Elections 2021: I Will Quit As Political Strategist if BJP Crosses 100 Seats, Reiterates Prashant Kishor.

On the day of result, Mamata Banerjee-led TMC not only registered a massive victory but also improved its tally. The TMC won, which contested 293 seats, won 211, 27 more than its 2011 tally. The Mahajot bagged 73 seats that included 26 seats of the CPIM and 44 of the Congress. The BJP could win just three seats. The TMC also became the first ruling party to win without an ally since 1962 in West Bengal.

This time, Mamata Banerjee is seeking her third consecutive term. She faces resurgent BJP, which has set a target of winning 200 seats. The Left and Congress have inducted the newly formed Indian Secular Front (ISF), initiated by Muslim cleric Abbas Siddiqui, into their alliance for the upcoming election.

(The above story first appeared on LatestLY on Mar 03, 2021 02:40 PM IST. For more news and updates on politics, world, sports, entertainment and lifestyle, log on to our website latestly.com).