West Bengal Assembly Election Results From 1952 to 2016: From Congress to Left And TMC, The Rise And Fall of Political Parties in The State Over The Years 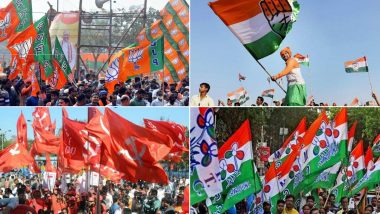 West Bengal Assembly Elections 2021 are expected to be held in May. The entire country's attention is focused on the state election. Parties - BJP, Congress, AITC, CPI, CPIM - are rigorously campaigning for the state election. While some local opinion polls have predicted a TMC win in the state, the BJP, has made significant gains in West Bengal after Lok Sabha Elections 2019.

West Bengal has always been the centre of politics, from the battle of Plassey to the partition of Bengal. West Bengal, after Independence, was of great political importance as it carries 42 Parliamentary Constituencies and 293 Assembly Constituencies.

Here's a look at the winning parties of the Legislative Assembly elections in West Bengal since India's Independence.

From 1952-1962, the Indian Nation Congress emerged with majority and ruled West Bengal for more than ten years. After 1962, West Bengal's politics took a swift turn and in the 1967 legislative assembly election, no party had the majority. The United Front emerged with a coalition comprising the Communist Party of India (Marxist), the Samyukta Socialist Party, the Socialist Unity Centre of India, the Marxist Forward Block, the Revolutionary Communist Party of India, the Workers Party of India and the Revolutionary Socialist Party.

The coalition did not turn out to be successful. In 1971, it split into two, The United Left Front, also known as the Six-Party Coalition. And the United Left Democratic Front, also known as the Eight-Party Coalition, led by the Communist Party of India and included the All India Forward Bloc, the Socialist Unity Centre of India, the All India Gorkha League, the Bolshevik Party of India, the RCPI, the Samyukta Socialist Party and the Praja Socialist Party.

In the 1972 West Bengal legislative election, the CPIM and Congress R coalition emerged with a majority. Siddharth Shankar Ray was made the Chief Minister of Bengal.

In 1977, The Left Front won the West Bengal assembly election. The result was a surprise to the Left Front itself, as it had offered 52% of the seats in the pre-electoral seat-sharing talks with the Janata Party. Jyoti Basu was made the Chief Minister of Bengal.

This year, the West Bengal Legislative Assembly Election has turned more exciting with the BJP making inroads in the state and the AIMIM's entry. All eyes are on whether the state will see a change.

(The above story first appeared on LatestLY on Feb 25, 2021 11:14 AM IST. For more news and updates on politics, world, sports, entertainment and lifestyle, log on to our website latestly.com).