Political strategist Prashant Kishor, whose I-PAC is handling election campaign of the TMC in West Bengal, has reiterated that the BJP would not cross 100 digit in the assembly polls. 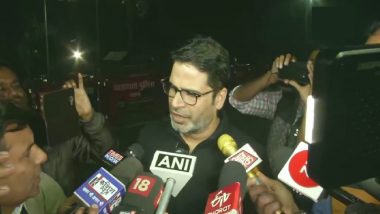 New Delhi, March 3: Political strategist Prashant Kishor, whose I-PAC is handling election campaign of the Trinamool Congress (TMC) in West Bengal, has reiterated that the Bharatiya Janata Party (BJP) would not cross 100 digit in the assembly polls. Speaking to a news channel, Prashant Kishor said he would quit as political strategist and leave I-PAC if the BJP wins in the West Bengal assembly elections.

"If BJP wins more than 100 seats in Bengal, then I will leave this job, I will leave IPAC as well. I will do something else, but not this work," Kishor told India Today. "I will stop this work. I will not exist as I am today. You will never see me again aiding any other political campaign," he added. He also said he enjoys full freedom to execute his strategies, which according to him was not the case in Uttar Pradesh.

The political strategist, who managed Narendra Modi's succefull 2014 Lok Sabha campaign, said that the only way BJP can make it in Bengal is if "TMC collapses under its own weight". He had predicted crushing defeat for the BJP even when dates for the West Bengal assembly elections were not announced.

"For all the hype AMPLIFIED by a section of supportive media, in reality BJP will struggle to CROSS DOUBLE DIGITS in #WestBengal PS: Please save this tweet and if BJP does any better I must quit this space! (sic)," he had tweeted. Reacting to his tweet, BJP National General Secretary Kailash Vijayvargiya quipped that the country would have to lose an election strategist (Kishor) if the BJP forms the next government in West Bengal.

Kishor, however, reiterated his claim after the Election Commission announced dates for the assembly polls in West Bengal. "One of the key battles FOR DEMOCRACY in India will be fought in West Bengal, and the people of Bengal are ready with their MESSAGE and determined to show the RIGHT CARD - #BanglaNijerMeyekeiChay (Bengal Only Wants its Own Daughter) PS: On 2nd May, hold me to my last tweet (sic)," Kishor said in a tweet last week.

(The above story first appeared on LatestLY on Mar 03, 2021 01:13 PM IST. For more news and updates on politics, world, sports, entertainment and lifestyle, log on to our website latestly.com).