The Calcutta High Court on Saturday criticised the Mamata Banerjee government and observed that the state has not taken any concrete steps to address the complaints pertaining to post-poll violence. 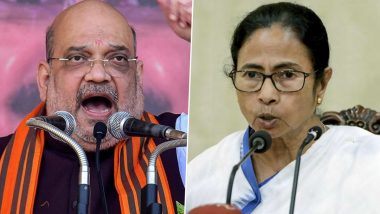 Kolkata, June 19:  Four days after West Bengal governor Jagdeep Dhankhar wrote to chief minister Mamata Banerjee alleging that the state government has been inactive and indifferent about the sufferings of the people due to post-poll violence, the Calcutta High Court on Saturday criticised the Mamata Banerjee government and observed that the state has not taken any concrete steps to address the complaints pertaining to post-poll violence.

"In a case where the allegation is that life and property of the residents of the State are in danger on account of alleged post poll violence, the State cannot be allowed to proceed in the manner it likes. The complaints required immediate action... It is the duty of the State to maintain law and order and inspire confidence in the residents of the State," the High Court observed. West Bengal Post Poll Violence: SC Judge Recuses From Plea Against Bengal Violence, Says ‘Personal Difficulty’

The five-member bench, hearing a clutch of petitions alleging hundreds of persons got displaced due to the violence and that they are now unable to return to their homes due to fear of backlash, also observed, "Though action should have been taken by the State but despite matter being pending in Court apparently no concrete steps have been taken".

The 5-judge bench headed by Acting Chief Justice Rajesh Bindal reminded the West Bengal Government that it is duty bound to maintain the law-and-order situation in the State and to inspire confidence in the people. The Bench also comprises of Justices I.P. Mukerji, Harish Tandon, Soumen Sen and Subrata Talukdar.

The Court asked the State to ensure that there is no obstruction of any kind in this process. "Such obstruction shall be viewed seriously, which may entail action under the Contempt of Courts Act besides others," the order said.

The Court also directed the State Legal Services Authority to look into complaints of displaced persons who are being prevented from returning to their homes and take necessary steps for their rehabilitation.

The court then ordered the National Human Rights Commission (NHRC) to constitute a committee that will examine complaints filed by persons who were displaced during the post-poll violence in West Bengal. Earlier, the High Court had constituted a committee composed of members nominated by NHRC, SHRC & SLSA to coordinate rehabilitation of displaced persons of Entally constituency.

The Committee shall examine all the cases and may be by visiting the affected areas will submit a comprehensive report to this Court about the present situation and also the steps to be taken to ensure confidence of the people that they can peacefully live in their houses and also carry on their occupation or business to earn their livelihood.

"The persons prima facie responsible for crime and the officers who maintained calculated silence on the issue, be pointed out," the Court added.

The case will be heard again on June 30.

(The above story first appeared on LatestLY on Jun 19, 2021 04:16 PM IST. For more news and updates on politics, world, sports, entertainment and lifestyle, log on to our website latestly.com).