As 2019 draws to a close, LatestLY complies a list of key legislation passed in this year. 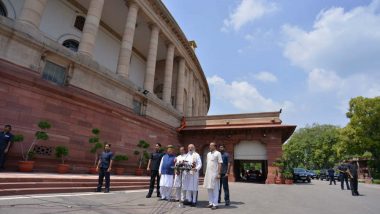 During the Budget Session, Parliament approved 28 Bills, including the one that bifurcates Jammu and Kashmir into two union territories and another that criminalises triple talaq. The Winter Session of Parliament saw the passage of 45 Bills. As 2019 draws to a close, LatestLY complies a list of key legislation passed in this year. Year Ender 2019: From Manohar Parrikar to Sushma Swaraj And Sheila Dikshit, Politicians That India Lost This Year.

The Aadhaar and Other Laws (Amendment) Bill, 2019: Parliament passed this legislation to amend the Aadhaar (Targeted Delivery of Financial and Other Subsidies, Benefits and Services) Act, 2016, the Indian Telegraph Act, 1885 and the Prevention of Money Laundering Act, 2002. The Bill allows voluntary use of Aadhaar as proof of identity for opening a bank account and procuring a mobile phone.

The Protection of Children from Sexual Offences (Amendment) Bill, 2019: This Bill was passed by Parliament to make punishment more stringent for committing sexual crimes against children including the death penalty. The amendments also provide for levy of fines and imprisonment to curb child pornography.

The Muslim Women (Protection of Rights on Marriage) Bill, 2019: Parliament passed this legislation which criminalises instant triple talaq among Muslims and fixes a jail term of three years for the husband.

The Motor Vehicles (Amendment) Bill, 2019: In a bid to impose strict penalties on violation of traffic rules and address the dire state of road safety in the country, Parliament approved amendments to the Motor Vehicles Act, 1988.

The Special Protection Group (Amendment) Bill, 2019: This legislation was cleared to amend the Special Protections Group Act, 1988. Under this Bill, SPG cover will be provided to the Prime Minister, and members of his immediate family residing with him at his official residence. Former Prime Ministers, and his immediate family members residing with him at the residence allotted to him will also get the SPG cover for a period of five years from the date on which he ceases to hold the office of Prime Minister.

The Constitution (One Hundred and Twenty-Sixth Amendment) Bill, 2019: This legislation was passed to extend the reservation for SCs and STs in the Lower House and the state assemblies by ten years.

The Citizenship (Amendment) Bill, 2019: This Bill, which has now become an Act, provides Indian citizenship to Hindus, Sikhs, Buddhists, Jains, Parsis and Christians from Afghanistan, Bangladesh and Pakistan, who arrived in India on or before December 31, 2014, due to religious persecution.

A presidential order scrapping special status of Jammu and Kashmir under Article 370 was also issued during the extended Budget Session. Another historic decision taken by the government in 2019 was approval to the Kartarpur Corridor which connects the Gurdwara Darbar Sahib in Pakistan's Kartarpur to Dera Baba Nanak shrine in India's Gurdaspur district.

(The above story first appeared on LatestLY on Dec 26, 2019 02:38 PM IST. For more news and updates on politics, world, sports, entertainment and lifestyle, log on to our website latestly.com).