Reliance Industries Limited chairman Anil Ambani and his wife Neeta Ambani celebrated their son Akash and Shloka Mehta’s marriage with defence and security personnel at the Dhirubhai Ambani Square in Mumbai on Tuesday. 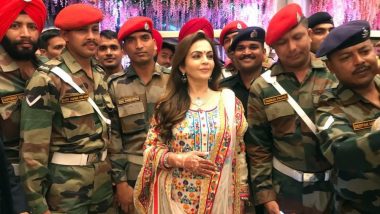 Speaking at the event Nita said, “We feel delighted and honoured that the protectors of this city and the nation are joining us in our celebrations. It's an emotional and joyous occasion for us and we hope these heroes, who make us proud every day, will shower their blessings on Akash and Shloka.”

Akash got married to Shloka on Saturday in an elaborate three-day wedding function. The wedding and reception ceremonies were attended by politicians, film stars, businessmen and cricketers. Popular pop rock band Maroon 5’s Adam Levine also performed at the reception.

(The above story first appeared on LatestLY on Mar 13, 2019 05:53 PM IST. For more news and updates on politics, world, sports, entertainment and lifestyle, log on to our website latestly.com).