Author Anneliese Khalil’s Debut Thriller Gains Popularity, and May Be One of the Best Thriller Books in 2021

Author Anneliese Khalil has announced the release of her thrilling debut novel, Ascension. Khalil’s unique style of storytelling stems from her wild imagination and willingness to engage with unorthodox metaphysical ideas. She was inspired to write by her desire to always create and contribute in some way. 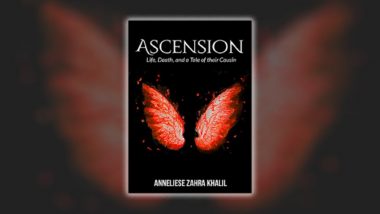 Author Anneliese Khalil has announced the release of her thrilling debut novel, Ascension. Khalil’s unique style of storytelling stems from her wild imagination and willingness to engage with unorthodox metaphysical ideas. She was inspired to write by her desire to always create and contribute in some way.

Ascension chronicles the life of Joel Stevens, who wanted more than anything to die.   In the middle of his suicide a passing vagrant, Donovan, intervenes.  Through Joel’s experience with his rescuer he realizes there is a literal alternative to death – ascension – the process of becoming an angel.

Joel and Donovan’s union is unbreakable, as Joel’s ascension is entirely dependent on Donovan’s guidance, who claims to be an angel.  They become inseparable from their first meeting and swiftly invade Joel’s home and marriage.

Joel follows Donovan’s instructions on several suicide attempts, devours his guide’s philosophical prose, rids himself of his most loved possessions, and allows his marriage to fracture.  Sarah, Joel’s wife, desperately fights to release Donovan’s hold on her husband.  Is Sarah battling a sociopathic homeless man that is destroying her already unwell husband?  Or is she up against a far more profound and powerful process?  Even Sarah isn’t sure…

Fans of Danielle Trussoni and Mark Z. Danielewski will appreciate Khalil’s dark alternative reality and atmospheric worldbuilding. This fast-paced supernatural thriller is more than just an engaging plot. Khalil’s characters are complex and fully developed as they navigate the mysterious question of what comes after death. As Donovan says to Joel, “…humans don’t become angels, Joel—but that doesn’t mean that they can’t.”

Reviewers describe Ascension as a fresh take on angels that positions them as neutral entities and hail Khalil’s ability to create tension between the three main characters. Readers with a diverse range of tastes will find something to appreciate in Khalil’s evocative prose and expert worldbuilding. She is an up-and-coming author to watch in the supernatural thriller genre.

Anneliese Khalil is a free-spirited creator with a passion for letting her imagination roam. Her debut novel, Ascension, is available for purchase on Amazon.com and other major retailers. After graduating from Rutgers University and launching a successful career in the residential construction industry, Khalil turned to writing to bring to life her rich ideas and memorable characters.