COVID-19 Crisis: After Zara, British Luxury Brand Burberry Announces to Cut 500 Jobs Globally, Here’s List of Other Fashion Brands Closing Down Its Stores Amid the Pandemic

Zara recently announced that it would close as many as 1,200 stores around the world and boost online sales during the chaos shaped by the coronavirus pandemic. Not only, Zara, but there are also other fashion brands and labels who decided to close down shutters of stores to revive the economy. 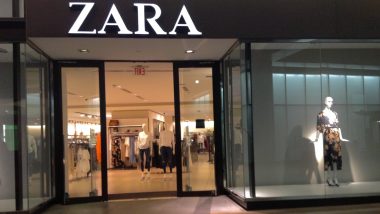 The pandemic has significantly impacted on the global economy. However, the sectors that are extremely hard hit are the ones that come in the category of non-essential spending. Design apparel and footwear also come in this category. Usually, at this time of the year, many of us, as customers, would be curating our perfect summer wardrobe, as we prepare for the warm weather and holidays. But we are not, as clothing sales plummeted as the world’s population is unable to travel or even socialise because of the pandemic. The fashion industry has been hit hard. Zara recently announced that it would close as many as 1,200 stores around the world and boost online sales during the chaos shaped by the coronavirus pandemic. Not only, Zara, but there are also other fashion brands and labels who decided to close down shutters of stores to revive the economy. Zara Has a New Logo & Fashion Lovers Are Unhappy! Netizens Share Their Disappointment Over the Curvy Fonts.

Zara owner Inditex decided to close as many as 1,200 stores around the world. Being one of the largest clothing retailers, the company has been walloped during the pandemic. Closures are reportedly concentrated in Asia and Europe. But Inditex assured that “headcount will remain stable,” as staffs are offered roles in other jobs such as dispatching online purchases. In markets where stores were already open, sales were reportedly down 16 percent between June 2 and June 8. However, the online sales had surged, rising to reportedly 95 percent in April, 2020.

The luxury brand, Burberry reported that it would cut about 500 jobs globally, including 150 British-based office roles. The British fashion group stated lockdowns sparked a sales collapse. The company announced the layoffs alongside a 45% drop in first-quarter like-for-like sales reflecting store closures after lockdowns in Europe and the United States and a dearth of long-haul travellers.

In the recent development, it was reported that Gap is closing its trending athletic wear brand Hill City, less than two years after it was launched. The apparel giant explained through a blog post that it made the decision to dedicates its resources to its larger brands—Gap, Banana Republic and Old Navy. Gap Inc has been struggling in recent years and pandemic has hit the company hard, with a majority of its stores being closed. In the first three months of this year, net sales reportedly went down by 43%.

JC Penny filed for bankruptcy protection last month, making it the biggest retailer to do since the pandemic forced non-essential stores to shut down temporarily. As per latest reports, the company will start closing 150 of its stores as the first phase of its effort to shrink its footprint. Meanwhile, JC Penny had reopened nearly 500 stores as coronavirus restrictions began to ease in some states.

The pandemic has hit the fashion industry severely. The above companies took the step to close down a few of its stores in order to recover what they lost as non-essential stores were forced to shut its temporary services. Many brands have also suspended advertising. However, some continue to use social media to promote products.

(The above story first appeared on LatestLY on Jul 16, 2020 04:17 PM IST. For more news and updates on politics, world, sports, entertainment and lifestyle, log on to our website latestly.com).