Met Gala 2022: Cara Delevingne Shocks Everyone By Ripping Off Her Jacket And Posing Topless On The Red Carpet (View Pics & Videos)

The 29-year-old Cara Delevingne wore only a pair of gold covers to protect her modesty and accessorised with a series of gold chains that extended down her bust in suspenders of sorts. 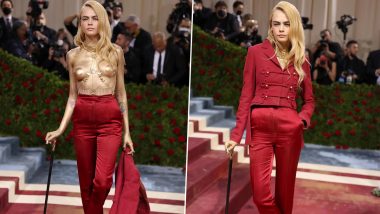 Los Angeles, May 3: Model-actress Cara Delevingne's make-up was hidden under her clothes as she stripped off at the star-studded Met Gala event. She stepped out in a red Dior Haute Couture suit complete with a walking stick and platform heels in matching color. She then took everyone by surprise as she took off the jacket and revealed her naked chest covered in shimmering gold body paint, reports aceshowbiz.com. Met Gala 2022: Nicki Minaj Puts On A Busty Display In A Black Tulle Gown (View Pics).

The 29-year-old wore only a pair of gold covers to protect her modesty and accessorised with a series of gold chains that extended down her bust in suspenders of sorts. She cheekily stuck out her tongue while posing for photographers after going topless.

#MetGala mania is back! For the 2022 edition, Muse @CaraDelevingne was dressed in a Haute Couture Spring-Summer 2019 look by Maria Grazia Chiuri, exemplifying the savoir-faire behind the House's tailoring and bringing a vibrant pop of red to the famous red carpet. #StarsInDior pic.twitter.com/OwO52KxGW7

Cara Delevingne is painted gold at the #MetGala https://t.co/7pfrLBlt8g pic.twitter.com/WxkLw9avGQ

Delevingne had her long blonde hair styled in loose waves. She also had hoards of rhinestones glued to her eyes in a cateye shape with shimmery shadow swiped across her brown bone.

Delevingne has attended the Met Gala since she made her debut in 2011. Last year, she made a statement with her Dior number which had the phrase "peg the patriarchy" emblazoned across her chest.

(The above story first appeared on LatestLY on May 03, 2022 04:23 PM IST. For more news and updates on politics, world, sports, entertainment and lifestyle, log on to our website latestly.com).