A weird tradition has been followed in a village in Spain called the baby jumping festival. Men dress as devils and jump over newborn babies born in the previous year to ward off the evil eye. 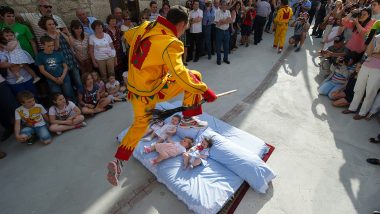 Every parent loves their baby and wants to protect it from any sort of bad thing or evil eyes. Various traditions are followed in different parts around the world to protect a baby from ill wishes. Amongst them is El Colacho or a baby jumping tradition that takes place in Spain. Known as El Colacho it is marked annually in the village of Castrillo de Murcia of Burgos province of Spain. It is held every year in the month of June. This year it was held on June 23 and recent videos from the same have emerged online. Men dressed as devils jump over newborn babies as a part of driving away from the evil forces. Texan Woman Delivers 6 Babies in 9 Minutes; What are Sextuplets and How Rare Are They?

It is one of the strange traditions that exist around the old but has been going on for nearly 4 centuries! The tradition has started back in 1620! During the celebrations of El Colacho, men dress up in red and yellow suits (representing devils) jump over babies born in the previous 12 months of the year. The newborns are kept on a mattresses un the street and the devils run and jump over them. While running, these devils hold a whip. It is a belief that devils drive away the evil forces by using these whips and castanets. These Videos of Babies Not Recognising Their Dads After Shaving Beard are Adorably Cute.

Over 100 of newborns take part in these annual celebrations. While the parents eagerly watch the celebrations, residents along the area put down white sheets from their balconies. It is a symbol of purity and hope that the evils will be driven away. The babies meanwhile are unaware as they lie on decorated mattresses. Often rose petals are put on the bed on which the babies are kept. And if you have fear of accidents, there has been none reported in the history of this festival. According to locals none of the babies have ever been injured in this 400-year-long tradition.

(The above story first appeared on LatestLY on Jun 25, 2019 09:32 AM IST. For more news and updates on politics, world, sports, entertainment and lifestyle, log on to our website latestly.com).