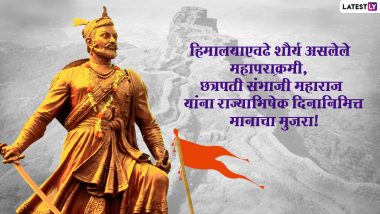 When is Chhatrapati Sambhaji Raje Rajyabhishek 2022?

Chhatrapati Sambhaji Raje Rajyabhishek 2022 will be celebrated on January 16. While Sambhaji Raje was given the duties of the king on July 20, 1680, in Panhala, his official coronation was done on January 16, 1681. This ceremony was conducted at the Raigad Fort, just like Chattrapati Shivaji Maharaj’s coronation.

While Chhatrapati Sambhaji Raje was the Maratha king for just a few years (9-10 years), the bravery he exhibited and the contributions he made in this time is significant. This is why the celebration of Sambhaji Raje Rajyabhishek is considered vital by the followers of Chatrapati. Sambhaji Raje took over the Maratha empire after the demise of Chattrapati Shivaji Maharaj in some troubling times. His reign was mainly spent tackling the ongoing wars between the Maratha kingdom and Mughal Empire, as well as other neighbouring powers such as the Siddis, Mysore and the Portuguese in Goa.

However, it is a known fact that Sambhaji Raje put up a brave fight even in these trying circumstances. He escaped the Mughal emperor Aurangazeb’s attempt to capture multiple times and kept the Maratha flag flying high. Even when he was captured in 1689 by deceit, Sambhaji stood strong against the torture and atrocities inflicted on him. He finally died in captivity on March 11, 1689, but historians quote that he showed exemplary courage, even while facing death.

(The above story first appeared on LatestLY on Jan 16, 2022 10:47 AM IST. For more news and updates on politics, world, sports, entertainment and lifestyle, log on to our website latestly.com).