Eid al-Adha 2020: List of Rules Prescribed by Islam For Animal Slaughtering on Bakrid

Islam has a set of rules for slaughtering animals. These norms must be strictly followed while doing sacrifice of animals, says Islam. 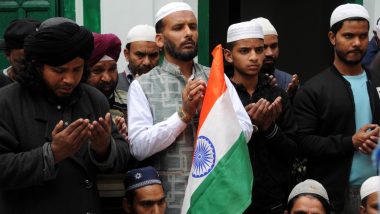 Mumbai, July 8: Eid al-Adha or Bakrid, also misspelt as Bakra Eid, will be celebrated in India either on July 31 or August 1. Bakrid is one of the two major festivals celebrated by the Muslim community worldwide - the other being Eid al-Fitr. On the occasion of Eid al-Adha, financially stable Muslims are required to sacrifice or slaughter a bovine or cattle and distribute its meat among relatives and poor people as part of a ritual. Islam has a set of rules for slaughtering animals. These norms must be strictly followed while doing sacrifice of animals, says Islam. Check out these rules below:

Hence, he decided to sacrifice the life of his son. His son Ismaeel too agreed to get killed as an act of obedience to God’s command. When Ibrahim attempted to cut the throat of his son, he was astonished to see that his son was replaced by a ham, which was slaughtered. This incident is mentioned in the Bible as well as in Torah with minor changes.

(The above story first appeared on LatestLY on Jul 09, 2020 06:28 PM IST. For more news and updates on politics, world, sports, entertainment and lifestyle, log on to our website latestly.com).