Independence Day 2020 Speech Videos: From Jawaharlal Nehru’s ‘Tryst With Destiny’ to Netaji Subhash Chandra Bose’s ‘Give Me Blood and I Will Give You Freedom,’ Powerful Speeches by Great Leaders That Echo India’s Freedom Struggle 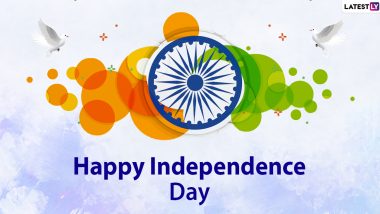 Independence Day 2020 in India is on August 15. This year, the country will mark the 74th Independence Day and preparations for the national day has begun in full swing. It was on the midnight of August 15, 1947, when India became an independent nation. The country achieved its freedom on the back of sacrifices made by numerous freedom fighters and patriots. They changed the fate of the country and brought the change, which once looked like a dream. What remains to us are their memories, and their words of wisdom. As we will celebrate a social distant Independence Day 2020, let us revisit history and listen to some of the greatest speeches made by our freedom fighters. From Jawaharlal Nehru’s “Tryst With Destiny,” to Netaji Subhash Chandra Bose’s “Give Me Blood and I Will Give You Freedom,” watch videos of our leaders giving speeches that echo country’s freedom struggle. Did You Know US Has Most Number of Gandhi Statues Outside India? Here Are 7 Memorials Dedicated to MK Gandhi Across Countries.

India’s first Prime Minister and the main ideologue of a socialist India, Pandit Jawaharlal Nehru delivered the “Tryst With Destiny,” speech to the Indian Constituent Assembly in the Parliament on the eve of India’s Independence, towards midnight on August 14, 1947. It is considered to be a landmark oration that captures the essence of the triumphant culmination of the Indian independence struggle against the British Raj. From Making Tricolour-Inspired Food to Singing Patriotic Hindi Songs, Here’s How You Can Celebrate Socially Distant 74th I-Day on 15th of August.

The principal architect of the Constituent of India and the first law minister of independent India, his Constituent Assembly speech is yet another powerful oration of the idea of a democratic and secular nation.

When Bal Gangadhar Tilak came out of prison after serving a sentence of six years, he gave a speech that revived the spirit of nationalism. His powerful words on “Freedom is My Birthright,” became very important in the national movement.

The Quit India Movement was the final whistle to end the British rule. The speech delivered by Mahatma Gandhi on August 8, 1942, addressed the A.I.C.C, at Mumbai (then Bombay) on the eve of Quit India Movement, is one of his best speeches.

“Give Me Blood and I Will Give You Freedom,” these words became like the anthem for the youth during India’s struggle for independence. Bose, the protagonist of the Indian Independence movement and the most vociferous voice to demand purna-swaraj, got immense support from the youth of the country at the time. His speech became historical and inspired citizens of the country at large.

These are some of the most famous speeches delivered by the country’s freedom fighters. It was their effort and constant struggle that gave India its freedom. Celebrate Independence Day 2020 by once again listening to these words orated by the leaders and honour their struggle for a free India.

(The above story first appeared on LatestLY on Aug 13, 2020 04:26 PM IST. For more news and updates on politics, world, sports, entertainment and lifestyle, log on to our website latestly.com).