National Video Game Day 2021: From Road Rash to Mario; 5 Video Games That Made Your Childhood Awesome

People across the United States and also people living in other parts of the world are celebrating National Video Game Day 2021 on July 8. Thus, here we have compiled a list of video games that made our childhood awesome. 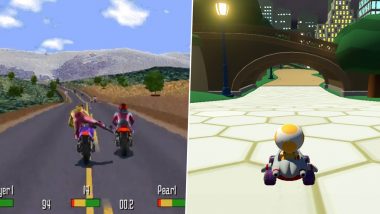 Video games are basically used for recreational purposes and they have gained a lot of popularity over the last few decades. They are not just for kids; people of any age can play video games without any hesitation. They are quite exciting and interestingly, there are several options available in the market. Currently, there are over five million video games available for video games lovers. However, National Video Game Day is observed every year on July 8. The day gives the gamers a chance to celebrate and invent new games in style! Apart from National Video Game Day, on September 12, National Video Games Day is celebrated every year. The celebration for both days is almost similar.

In the 1950s, the first-ever video games were developed in universities. Dr Edward Uhler Condon unveiled that the first mathematical game ‘Nim’ was displayed in 1940 and it was played by more than 50,000 people. Later, in 1967, the father of gaming, Ralph Baer created the first-ever game ‘Brown Box’ for commercial use.

Gaming is a serious business and the very first video game ever invented involved simple table tennis. From humble old-school games to tough digital games, gaming has definitely come a long way. Now, there are so many video games available that have better stories than actual action films. And nowadays, when going out is not an option due to the ongoing pandemic, video games can actually keep you engaged throughout. Now, let's take a look at a few interesting video games that made our childhood quite awesome.

Mario was extremely popular in the early 90s. The game gained a lot of success and it was sold like hot cakes for several years.

Many Filipino play this since when childhood.🇵🇭🎮

I played it since when I was child!

The simple plot of the game was extremely fascinating. It used to keep us engaged for a longer period of time.

You all this old ? #RoadRash pic.twitter.com/KtHLbrXjqE

This game was extremely popular among bikers and people who used to love bikes. There was a craze to win the race by defeating the opponent.

#ThrowbackThursday #GamePower Did anyone ever beat level 99 to get the "kill Screen"? This game was fun and definitely a genius creation using simple concepts; mirrors. #DuckHunt #retrogamer pic.twitter.com/mBAWYp6wbN

This gun shooter game was amazing. It was undoubtedly popular in the 90s.

Eat your heart out with this month's #LootGaming theme: Sweet! Featuring exclusive gear from #PacMan! 👻

Not only in the 90s but Pac-Man is considered to be the most played game in the world.

(The above story first appeared on LatestLY on Jul 08, 2021 12:08 PM IST. For more news and updates on politics, world, sports, entertainment and lifestyle, log on to our website latestly.com).