Born as Rabindranath Thakur, he played a crucial role in shaping the Bengali literature, music and art. 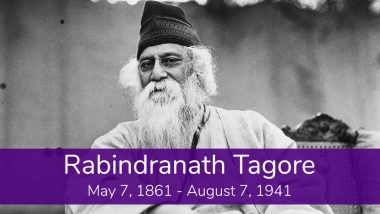 Rabindranath Tagore who was popularly known as Gurudev was born on May 7 in Calcutta. He is known for shaping Bengali literature and music in the 19 and early 20th century. Born as Rabindranath Thakur, he played a crucial role in shaping the Bengali literature, music and art. While Rabindra Jayanti is celebrated on May 7 every year, Bengalis observe it on Pochishe Boishakh, the 25th day of the first Bengali month of Boishakh, and which rarely coincides with May 7. On Rabindra Jayanti 2019, numerous cultural programmes and events are held in schools, colleges, universities and other places remembering the lover of art. Rabindranath Tagore and Translations: Why His Works Hold Indomitable Influence in Literature.

His writings gave rise to new forms of prose and verse which were different from the traditional models based on classical Sanskrit. He was the first non-European to win the Nobel Prize in Literature in 1913. As the birth anniversary of the great mind approaches, we take a look at some of the interesting facts about his life. He pioneered against the stereotypical belief that India was only a country of snake-charmers and superstitions. He travelled around the world and highlighted the richness of the country and toiled to showcase the country's diversity. The renowned novelist, dramatist and songwriter who was also called Kabiguru, and Biswakabi passed away on August 7, 1941, in Calcutta. Rabindranath Tagore Jayanti: Quotes by the Universal Voice and Cultural Icon on His 158th Birth Anniversary.

Here are some facts about Rabindranath Tagore:

The man's legacy continues to go on even years after his death. Tagore began drawing and painting at the age of 60 and also held many successful exhibitions. His works were mostly inspired by the works of scrimshaw from northern New Ireland, Haida carvings from British Columbia and Max Pechstein's woodcuts. His works were known for its strange colour schemes and off-beat aesthetics which led to the popular belief that Tagore was red-green colour blind. It was Tagore who conferred the title of 'Mahatma' on Mohandas Karamchand Gandhi in 1915. According to historians, though Tagore admired Gandhi's works, he differed with him on certain issues.  Rabindranath has a rich legacy of inspiring generations across the globe with his work and continues to do so.

(The above story first appeared on LatestLY on May 06, 2019 07:00 PM IST. For more news and updates on politics, world, sports, entertainment and lifestyle, log on to our website latestly.com).