Referred to as 'the Bard of Bengal', Kabiguru Rabindranath Tagore was born on he 25th day of the Bengali month of Boishakh, 1268, which is usually celebrated on May 7, 1861 (AD) each year. Numerous cultural programmes and events are planned each year globally -- such as Kobipronam -- as a tribute to Tagore. 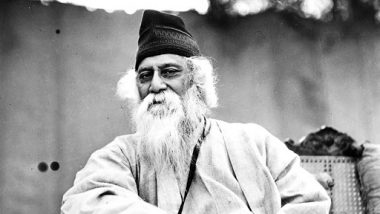 Call him Gurudev, Kabiguru, and Biswakabi or Bhanu Singha Thakur, India's first Nobel laureate Rabindranath Tagore is sometimes referred to as 'the Bard of Bengal'. Born on the 25th day of the Bengali month of Boishakh, 1268,  -- depending on the Bengali ponjika (calendar) -- Tagore's birthday is usually celebrated on May 7 each year as per Gregorian calendar. Numerous cultural programmes and events are planned each year globally -- such as Kobipronam -- as a tribute to Tagore and his works.

As per the Gregorian calendar, Rabindranath Tagore was born in 1861 and hence, this year too, Rabindra Jayanti will be celebrated on May 7. The importance of Rabindra Jayanti for Bengali community is such that apart from the cultural events, people love to discuss the life and works of Tagore. They sing Rabindra Sangeet or songs written and composed by him, dance to Rabindra Sangeet and other events like drama, writing, poetry recitation, etc are being conducted on the works of 'Rabi Thakur'. Rabindra Jayanti 2019: Know Interesting Facts From Rabindranath Tagore's Life on His Birth Anniversary.

Rabindranath was born to Debendranath Tagore and Sarada Devi in the Jorasanko mansion in Calcutta. Being the youngest among the 13 children, he was raised mostly by servants after the death of his mother as his father used to travel widely. Rabindranath was surrounded by musicians, poets and philosophers in the family itself. However, abrupt suicide of his  his elder brother's Jyotirindranath wife -- Kadambari Devi -- in 1884, he was left profoundly distraught. Following this, he avoided classroom and use to roam the manor or nearby Bolpur and Panihati.

At 11 years of age in February 1873, Rabindranath left to tour India along with his father. After after arriving at Amritsar, he stood there for a month, he read biographies, studied history, astronomy, modern science, and Sanskrit, and examined the classical poetry of Kalidasa. Influenced by Gurbani and Nanakbani, Tagore wrote 6 poems relating to Sikhism and a number of articles in Bengali child magazine about Sikhism. Rabindranath Tagore Jayanti: Quotes by the Universal Voice and Cultural Icon on His 158th Birth Anniversary.

After spending a brief period at law school in University College in London in 1877, Tagore opted for independent study of Shakespeare's plays Coriolanus, and Antony and Cleopatra and the Religio Medici of Thomas Browne. Tagore's return to ancestral estates in Shelaidaha (today a region of Bangladesh) as Zamindaar babu in 1890, made him introduce to Baul Lalon Shah through which Tagore grew interest Baul Sangeet, which is a folk music.

With time, Tagore shifted his base to Shantiniketan in 1901, where his wife Mrinalini Devi and two of his children died. Rabindranath started a Brahmacharyaashrama in 1901 in Shanitinektan and it came to be known as Patha Bhavana from 1925. In November 1913, Tagore learned he had won that year's Nobel Prize in Literature for Gitanjali. In 1921, Tagore founded Viswa Bharati, which later was declared to be a central university in 1951. Rabindranath Tagore Death Anniversary: Remembering Asia's First Nobel Laureate Who Penned Down National Anthem of India.

According to some data, Tagore set foot in more than thirty countries on five continents between 1878 and 1932. Also, Rabindranath visited United States and the United Kingdom in 1912, Japan in 1916, Mexico and Argentina in 1924 and Italy and Hungary in 1926. He also traveled to Southeast Asia -- Bali, Java, Kuala Lumpur, Malacca, Penang, Siam, and Singapore in 1927. His travel to Denmark, Switzerland, and Germany in 1930, ended up into Soviet Union.

With his vast and vivid experience of travel and meeting with people, Tagore wrote novels, essays, short stories, travelogues, dramas, and thousands of songs, apart from his poetries. Tagore was a prolific composer with around 2,230 songs to his credit. Tagore took up drawing and painting when he was 60 years. Today, India's National Gallery of Modern Art lists 102 works in its collections by Tagore. Rabindranath Tagore and Translations: Why His Works Hold Indomitable Influence in Literature.

Not only art and aesthetics, Tagore's role in politics and Indian Independence struggle is widely known. He supported Indian nationalists. However, he was the one who lampooned the Swadeshi movement and requested the masses seek self-help and education. In his opinion, British administration was a 'political symptom of our social disease'. He was the one who penned the India's national anthem 'Jana Gana Mana' and Bangladesh's Amar Shonar Bangla. He was was key in resolving a Mahatma Gandhi– Bhimrao Ambedkar dispute involving separate electorates for untouchables. Today, Indians and art lovers are celebrating the 159th birth anniversary of Kabiguru Rabindranath Tagore.

(The above story first appeared on LatestLY on May 07, 2020 08:00 AM IST. For more news and updates on politics, world, sports, entertainment and lifestyle, log on to our website latestly.com).