Sri Ramanujacharya Jayanti 2022 Date, Shubh Muhurat & Significance: Everything You Need To Know About the Theologian Philosopher and Thinker

Happy Ramanujacharya Jayanti 2022! Ramanuja Jayanti, also known as Sri Ramanuja Acharya Jayanti, is celebrated to pay tribute to the South Indian philosopher Ramanuja Acharya. He was an Indian theologian and one of the most prominent representatives of the Sri Vaishnavism tradition. His deep foundation was influential to the Bhakti movement. 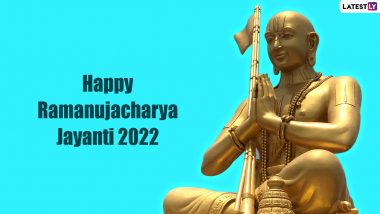 Happy Ramanujacharya Jayanti 2022! Ramanuja Jayanti, also known as Sri Ramanuja Acharya Jayanti, is celebrated to pay tribute to the South Indian philosopher Ramanuja Acharya. He was an Indian theologian and one of the most prominent representatives of the Sri Vaishnavism tradition. His deep foundation was influential to the Bhakti movement. He was also the one who believed that worshipping Lord Vishnu was the only way that could help one attain moksha or better-known salvation. The land of India is very holy, many saints and mahatmas were born here. One of these great saints was Sri Ramanuja Acharya. Saint Ramanuja was a strong devotee of Lord Vishnu. He played an important role in Bhakti Andalon. The great saint Sri Ramanujam was born in a Brahmin family of Sri Perambudur (Tamil Nadu) in 1017 AD according to Hindu beliefs. His father's name was Keshav Bhatt who passed away when he was very young. Apart from being a Vaishnava saint, he has had a great influence on the Bhakti tradition. The Knowledge of Sri Ramanujacharya Ji is a Priceless Asset to Our Culture & Heritage.

Ramanujacharya Jayanti will be celebrated on Friday, May 6, 2022. According to the Tamil solar calendar, Ramanuja Jayanti is celebrated in the month of Chithirai on the Thiruvathira constellation day.

The famous philosopher Ramanuja Acharya delineated and defined the principles of Advaita Vedanta. He supported Vaishnavism and wandered across the country to make people aware of the ethics and teachings of Vaishnavism. Ramanuja inspired the practice of Bhakti Yoga which focused on the importance of bhakti (devotion) over meditation. Bhakti Yoga aka Bhakti Marga is a spiritual practice within Hinduism centred on devotion to a personal God.

According to historical writings, Indian scholars were enlightened by the vision of Lord Vishnu and Goddess Lakshmi. There are many famous writings and sermons about Ramanuja Acharya. The 9 most famous works of Ramanuja are known as Navaratnas. As a child, he learned the Vedas from Yadav Prakash Guru in Kanch. Usually, Ramanujacharya Jayanti falls in the month of Chaitra and it usually falls on Thiruvathirai Nakshatra. Ramanujacharya has been honoured as the most learned Acharya who by advocating the philosophy and ethics of Vaishnavism laid the foundation of virtuous devotion in the society.

(The above story first appeared on LatestLY on May 06, 2022 08:09 AM IST. For more news and updates on politics, world, sports, entertainment and lifestyle, log on to our website latestly.com).