When is Eid 2020 According to Moon Sighting Committees? Indonesia, Malaysia, Saudi Arabia, UAE, Kerala Confirm May 24 as Date of Eid-al-Fitr, Indian Muslims to Look For Chand Today

The regions mentioned above had completed 29 days of Ramadan ul Kareem on Friday. Had the moon been sighted, then Eid al-Fitr would had been observed tomorrow. Since the crescent was not seen, the 30th fast of Ramadan would be observed tomorrow and Eid be celebrated on Sunday. 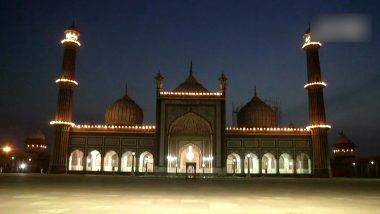 Riyadh, May 23: The new moon, marking the end of Ramadan and beginning of the next Islamic month of Shawwal, was not sighted in any part of the world on Friday. In regions where the Ramadan began from April 24, the 30-day cycle of fasts would complete on Saturday and Eid Al-Fitr would be celebrated on Sunday, May 24. The list of such nations includes most countries of the world excluding parts of West Asia, western and southern Africa and Indian subcontinent. Muslims in India will look for the crescent moon this evening. Eid Moon Not Sighted in Saudi Arabia, UAE and Other Parts of Middle East.

Moon sighting was attempted today in Saudi Arabia, UAE and rest of Middle East, along with Indonesia, Malaysia, Philippines and other parts of Southeast Asia. In India, Kerala and coastal Karnataka attempted the sighting of Shawwal moon. The reports were negative from all the above areas, with the moon not being sighted.

The regions mentioned above had completed 29 days of Ramadan ul Kareem. Had the moon been sighted, then Eid al-Fitr would had been observed tomorrow. Since the crescent was not seen, the 30th fast of Ramadan would be observed tomorrow and Eid be celebrated on Sunday.

In several parts of Europe, including Bosnia and Herzegovina, Albania, Slovenia and Turkey -- astronomical data is used to determine the date of Eid celebrations. It was already announced that Eid would be observed this year on Sunday.

This group of nations would attempt sighting the moon tomorrow. If they succeed in spotting the crescent, then a rare situation would be witnessed when 1.6 billion Muslims across the world would observe Eid on the same day. If the moon remains unseen, then Eid al-Fitr would be observed in these parts of the world on Monday, May 25.

The decision would be finalised by the moon sighting committees that will convene ahead of Maghrib prayers tomorrow. In Pakistan, Science Minister Fawad Chaudhary on Friday claimed that Eid would be observed on Sunday, as per the data received from the astronomical department.

The Ministry's claim, however, is not binding upon Muslims of the country. The Ruet-e-Hilal Committee headed by Mufti Muneeb ur Rehman would take the final call on observance of Eid al-Fitr on Sunday. The announcement would be made only after testimonies are received of crescent sighting.

(The above story first appeared on LatestLY on May 23, 2020 01:22 PM IST. For more news and updates on politics, world, sports, entertainment and lifestyle, log on to our website latestly.com).