Did you know that Bisexual female bonobos make lengthy eye contact during sex? Yes, at least that is what new research has to say. And this lengthy eye contact isn't meaningless but in fact, is in an attempt to form intimate social bonds just like humans. 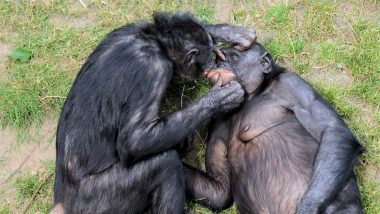 Did you know that bisexual female bonobos make lengthy eye contact during sex? Yes, at least that is what new research has to say. And this lengthy eye contact isn't meaningless but in fact, is in an attempt to form intimate social bonds just like humans. They wish to bond with their partners before having sex, study shows. The new research shows that sex among bonobos is not sex-specific it is more than that. Sex among the apes often not even for reproduction. Gorilla ‘Funerals’ Prove that the Apes Grieve the Dead, But Simians Licking Corpses of Loved Ones Could Spread Ebola, Warns Experts (Watch Video).

The revelation came out after Researchers studied the behaviour of 17 bonobos at a zoo in Stuttgart, Germany and found out that female bonobos make more eye contact if they do not know each other well. The idea is to develop the bonds between the two like they use to assert themselves against males. Bisexual female bonobos make eye contact for a longer duration while or before having sex, says the study. The research took place at the Wilhelma zoo in Stuttgart, in southwest Germany, it was aimed at studying the role of eye contact in the socio-sexual behaviour of 17 bonobos. During the study, they found out that the more the female bonbons looked at each other gazing into the eyes, the less two female bonobos knew each other.

"Female [bonobos] engage in homosexual ventro-ventral, genito-genital rubbing during which they embrace each other while rubbing part of their vulvae and, sometimes, clitoris," the team wrote in their paper. They further said that  Face-to-face or "ventro-ventral" sex positions were long thought to be exclusive to human sex, but are actually enjoyed by bonobos of both sexes, whether in female-female, female-male or male-male pairings. They said, "Ventro-ventral, genito-genital rubbing facilitates conflict resolution, anxiety reduction and social bonding."

Ms Annicchiarico added: "We found that EEC was negatively affected by female bonding — the more the eye contact, the weaker the social relationship. My scientific interests mainly concern that sphere of behaviour that was thought to be exclusively human — emotions, empathy and altruistic behaviour as well as non-verbal communication".

(The above story first appeared on LatestLY on Oct 31, 2020 03:03 PM IST. For more news and updates on politics, world, sports, entertainment and lifestyle, log on to our website latestly.com).