Dave Bautista turns 51 years old on January 18, 2020. He is popularly known by the ring name of Batista in WWE, where he began his career in the year 1999 when the company was known as WWF. He has been WWE Champion twice in his career, while he has won WWE World Heavyweight Championship belt four times. 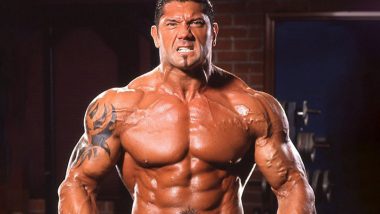 Dave Bautista turns 51 on January 18, 2020. He is popularly known by his ring name, Batista in World Wrestling Entertainment (WWE), where he began his career in the year 1999 when the company was known as World Wrestling Federation (WWF). He has been WWE Champion twice in his career, while he has won WWE World Heavyweight Championship belt four times. Before becoming a wrestler Bautista was a professional bodybuilder and his eye-catching massive physique has always grabbed attention. On the occasion of Dave Bautista's birthday, let's look at the fitness regime of Drax The Destroyer that helps him main his muscular body. We will also throw light on Batista's workout and diet. Huma Qureshi Poses with Dave Bautista but He Has His Eyes Set on Food on the Sets of Army of the Dead.

Bautista was last seen in a brutal fight against Triple H at WrestleMania 35, a match that kept the spectators at the edge of their seats. Unfortunately for Batista, he ended losing in a hard-fought battle. Bautista has also tried his hands in mixed martial arts (MMA), where he defeated Vince Lucero via on October 6, 2012. The same year he had signed a contract with Classic Entertainment & Sports to fight in MMA.  In the early years of his wrestling career, he used to focus only on hypertrophy, however, after entering into a sport his training got more inclined towards, power, strength as well as endurance. Stuber: Dave Bautista and Kumail Nanjiani Discussed Toxic Masculinity Throughout the Film.

Batista is now into his fifties, however, he is no less than any professional aesthetic model even at this age. In order to maintain his fitness and justify the role of Drax The Destroyer from Guardians of the Galaxy and Avengers fame, Bautista makes sure that he does safe and smart training. As age increases, the body needs more time for recovery after the workout, therefore, Bautista does training only thrice on a week i.e. Monday, Wednesday and Friday. Mondays are dedicated to full lower body intense training, while Wednesdays are for back and shoulder exercises. The Marvel actor trains his chest and arms on Friday after which he gives his body two days of consecutive rest. Bautista specifically also add core training to end his Friday session. In the below video, you can see the actor perform kick-boxing exercises, a definite part of his training regime. Year Ender 2019: From Seth Rollins vs Brock Lesnar to Triple H vs Batista, Here Are the 5 Best Matches in WWE (Watch Videos)

Bautista follows a high protein and low-fat diet. Although, he also includes carbohydrates like potatoes and other simple carbs in his meal to get enough fuel for his workout. Grilled chicken, brown rice, tuna salad are some of the favourite food items in his meal. He drinks protein shake in the morning along with egg whites and oatmeal, while after the workout he makes sure that he takes proper whey protein. The last meal of Bautista also includes a protein shake.

Bautista indeed puts up a lot of effort to always look ripped up. The former wrestler has struggled a lot in his life to reach fame. Before becoming wrestler, Bautista was also a nightclub bouncer and admitted that he has led his childhood days in poverty. Looking at Bautista's training we can clearly say there is no substitute for hard work. We wish Dave Bautista a very Happy Birthday.

(The above story first appeared on LatestLY on Jan 18, 2020 11:15 AM IST. For more news and updates on politics, world, sports, entertainment and lifestyle, log on to our website latestly.com).