Radhika Madan turns 25 years old on May 1, 2020. The actress with her entry in Bollywood just two years back has already earned appreciation for her acting. Radhika is highly gorgeous and naturally posses a very glamourous look. The TV star turned actress was recently seen in Angrezi Medium, where she played the role of late Irrfan Khan's daughter. 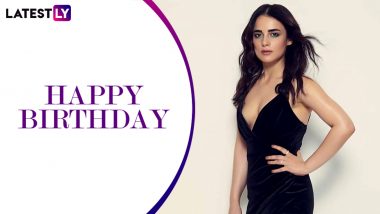 Radhika Madan turns 25 years old on May 1, 2020. The actress with her entry in Bollywood, just two years back, has already earned appreciation for her acting. Radhika is gorgeous and naturally possesses a glamourous look. The TV star-turned-actress was recently seen in Angrezi Medium, where she played the role of late Irrfan Khan's daughter. Till now she has featured in three movies, with a totally different physique and looks. The actress has perfectly worked and fitted herself in all roles. On the occasion of Radhika Madan's birthday, let us take a look at her workout and diet, which has helped the actress stay fit. Radhika Madan Is a Red Hot Mess in Sequins, Tulle and an Anarkali Cap on the Cover for Candy Magazine This Month!

Radhika Madan herself was a dance trainer in New Delhi before she started her television career in the year 2014. She got her first break from daily show Meri Aashiqui Tum Se Hi that aired for one and a half year on Colors TV. Radhika's debut Bollywood movie was Pataakha, released in the year 2018 and directed by Vishal Bhardwaj. The actress' second movie was Mard ko Dard Nahi Hota which came out in the year 2019. For the movie Pataakha the actress gained 12 kg as per the role requirement, while for Mard ko Dard Nahi Hota she, rigorously trained her body to play the character of a martial artist. However, for Angrezi Medium, she completely transformed her body and lost all fat to look like a 17-year-old girl. Let us take a look at her workout and diet.

Radhika Madan regularly performs kickboxing exercises to keep herself in good shape. Practising yoga is one of the necessary components of her fitness regime. In order to play the role of a 17-year-old student in Angrezi Medium, Radhika Madan adopted Tabata workout. Tabata is a form of HIIT (High-Intensity Interval Training) which involves eight rounds of 20 seconds each and 10 seconds rest period in between. This helped her in fat loss and also maintaining lean mass in the body.

Thankful for the new beginnings and your endless love and support.😇

The actress for her Angrezi Medium role turned vegan which helped her achieve a good result. Also, to justify her student character, the Bollywood actress ensured that she was strict about her calorie intake. Radhika Madan makes it a point to have her dinner before 8 pm anyhow.

Radhika Madan will be next seen in Shiddat which is being directed by Kunal Deshmukh. We wish the beautiful Bollywood diva a very Happy Birthday and hope she has a successful and prosperous year ahead.

(The above story first appeared on LatestLY on May 01, 2020 09:00 AM IST. For more news and updates on politics, world, sports, entertainment and lifestyle, log on to our website latestly.com).