How Peru's Alonzo Vega Is Disrupting The Contemporary Art Scene

The self-proclaimed creative outlaw has captured the attention of collectors and connoisseurs around the world. Contemporary artist Alonzo Vega at his studio in Lima, Peru. 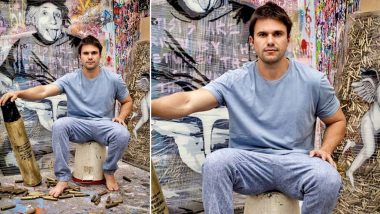 Peru's Alonzo Vega (Photo Credits: File Photo)
The self-proclaimed creative outlaw has captured the attention of collectors and connoisseurs around the world. Contemporary artist Alonzo Vega at his studio in Lima, Peru. For a man who has never compromised his own freedom to create, the current state of affairs in the world of contemporary art is ready to undergo a transformative change.
“Contemporary art has started to lose its power to convey feelings. Too often an artist´s work is valued for the signature rather than for the message of the piece itself.” –Alonzo expresses. The artist, who has also become a father for the first time less than a month ago, believes that every piece should speak for itself. He finds titles to be an uncomfortable necessity when showcasing his work in galleries and is determined to live his creative life outside the lines of outdated conventions.
“The beautiful thing about art is that you can change as many times as you want. If I want to express a particular emotion, and then that emotion evolves or changes, I just paint over it. Something you can do in art, but not in life. Ultimate liberty.” –he affirms, while reaching for a can of spray paint.
Alonzo is a self taught painter, he does not limit himself to a specific material, he plays, like a child does. He explores and experiments freely, and in that freedom the artist finds himself.  He paints on bullets, influenced by his ancestors´ military triumphs; He pushes the boundaries of mixed media and re-imagines pop culture icons and historical figures in a way that only a true artist could. He thrives under pressure and has embraced his power to disrupt the status quo.
As the world undergoes changes unlike anything we´ve seen before, somewhere in South America an artist questions himself as he wrestles with the elemental questions of life, voraciously devouring the art supplies that flood his home studio, in a quest to bring emotion back to a sedated world. That artist is Alonzo Vega; a name to remember.
Comments
Tags:
Alonzo Vega
Comments
You might also like