As the world celebrates the International Albinism Awareness Day, we take a look at some prominent people who crossed the hurdles of violence, social injustice, and normalcy and made their names in history, despite the albinism disorder. 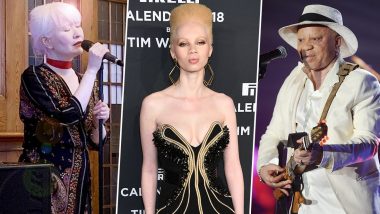 The United General Assembly adopted a resolution in 2014, confirming the observance of International Albinism Awareness Day on June 13th. The first celebration of this global event took place in the year 2015. There’s a long history of violence and denial of human rights against the people who suffer from the albinism disorder. There are several myths and artefacts which suggest that people who suffered from albinism in Africa, the Caribbean, North America, and South America were degraded, killed, etc. over the years.

However, there are thousands of people who have weathered the treachery and rose above all the violence. A lot of people have made it big in the world despite all the odds. As the world celebrates the International Albinism Awareness Day, we take a look at some prominent people who crossed the hurdles of violence, social injustice, and normalcy and made their names in history, despite the albinism disorder. International Albinism Awareness Day 2020: What Causes Albinism? Types of This Genetic Disorder Causing Skin and Hair Discolouration Explained!

Connie Chiu is widely known to be the world’s first fashion model suffering from albinism. Born in British Hong Kong, and brought up in Kowloon, she is a professional model and a jazz musician.

Popularly known as Cano Estremera, he is the most famous albino in Puerto Rico, a Caribbean country. He is popularly nicknamed as ‘El Cano’, which roughly translates to ‘The Light-Coloured Haired One’. Professionally, he is a Salsa singer.

G Harishankar was a kanjira (also known as Khanjira or Khanjari) player, which is quite a useful instrument in Carnatic music. He happens to be the only kanjira player who was awarded the Sangeet Natak Akademi Award in Indian history.

Thando Hopa hails from South Africa. Professionally, she is a lawyer, activist and a model as well. Not many people know that she is the first women, suffering from albinism, to feature on the cover of Vogue magazine.

Salif Keita hails from Republic of Mali, Africa. He is popularly known as the ‘Golden Voice of Africa’. Professionally, he is a pop singer-songwriter. It is a little-known fact that he belongs to the Keita Royal Family of Mali.

Hermeto Pascoal is a legendary figure in the Brazilian music industry. He is popularly known for his impeccable contribution as a producer and contributor to many albums, both Brazilian and international. Professionally he is a composer and multi-instrumentalist.

Edgar Winter hails from the United States (US). He is a popular musician, a songwriter who achieved unparalleled success in the 1970s in the American music industry. He is known for ‘Frankenstein’ and ‘Free Ride’, which were his group’s – The Edgar Winter Group – song.

There are a lot of people who suffer from Albinism and have gone on to achieve a lot and conquer the world. As the world celebrates the global event on June 13, we at LatestLY wish you all a very ‘Happy International Albinism Awareness Day 2020’. We hope you do your bit and contribute to the cause of people, who have this disorder, on this day.

(The above story first appeared on LatestLY on Jun 13, 2020 10:12 AM IST. For more news and updates on politics, world, sports, entertainment and lifestyle, log on to our website latestly.com).