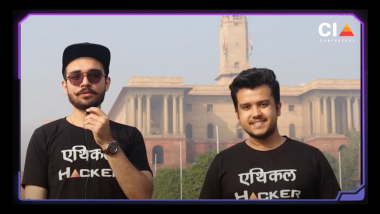 The idea has been founded by two young engineers from India, Vaibhav Jha & Arjun Chaudhary

Vaibhav Jha & Arjun Chaudhary first met at the Gurugram Police Summer Internship, Arjun was in second year of his engineering at SRM, Delhi while Vaibhav was in the final year student at Manav Rachna International University, Faridabad.The two got talking and realised a common passion for bringing the change in the mindset of people regarding Cyber Security & Hacking.

Vaibhav started his entrepreneurial journey at the age of 18, later Arjun joined him and the duo founded the CIA Conference, an international conference series on Cyber Security amid the COVID-19 Pandemic.

The term CIA defines the CIA triad, a benchmark model in information security designed to govern and evaluate how an organization handles data when it is stored, transmitted, or processed.

Journey of these Innovators

Vaibhav Jha, who is a cyber security researcher and one of the founders of CIA Conference, is the youngest India to train IAAS Officers and International Bureaucrats of more than 35 countries. Vaibhav has been awarded the tag of Budding Researcher Award by IEEE at an International Conference at Dubai. Whereas Arjun Chaudhary, is the security researcher & certified ethical hacker with a passion for finding bugs and flaws on bug bounty platforms. His major areas of interest are web security and VAPT. Apart from this he is leading the local chapter of OWASP in India. Arjun has been to many cybersec conferences around the globe and has quite good experience in managing events and conferences.

Intersquad Cyber Intelligence Pvt Ltd is the parent company of CIA Conference, and the conference was first organised in 2018 at Manav Rachna Campus, their first chief guest was Dr. Gulshan Rai ex-Chief Information Security Officer at the Prime Minister’s Office, Government of India.

In the first edition of CIA Conference which was held at Manav Rachna Campus, Faridabad some 500 participants took part. Vaibhav, who completed his engineering in Computer Science stream from Manav Rachna got the opportunity to tie up with them and thus got the venue in the campus itself.

They came into the limelight after their concept of Gaming CTF Platform. CIA Conference launched Asia’s first Platform based on Unity 3D. It enables the CTF teams to play the game in real time and solve the integrated challenges. This Game Based CTF became the most unique CTF platform and was loved by many CTF players all across the globe.

In a recent interview, they announced that they are planning to expand their operations in North America and thus will host the next edition of CIA Conference 2022 at Canada.