Manoj is part of three to four upcoming movies recently and he is a voice over artist for a Russian company. Manoj has won two national awards which is a great achievement. 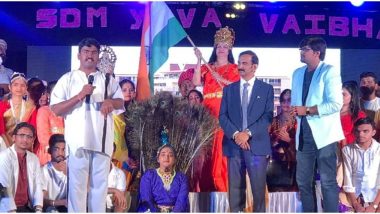 Music plays an essential role in our lives. Indian music has reached to every corner of the world all thanks to new batch singers of the 21st century. New Batch of singers is setting high standards with their singing. As we are talking about A-listed Singer, we came across one fabulous vocalist name Manoj Sharma, a medical student who is buzzing high for his soulful voice and as a voice-over artist.

At the mere age of 4, Manoj Sharma started vocalising with the support of his parents SR Srinivas and CS Lakshmi. He is now a trained singer who is capable of singing any kind of song. His versatility is his USP.

Very few lucky ones get this kind of principle in today's time, and Manoj Sharma feels he is fortunate that he is having a Guru in Dr Prasanna Narasimha Rao to his side who always support him. The fame which Manoj Sharma is gaining is all thanks to his Beloved Guruji, and his classical music trainer Vidwan K R Venkatesh.

Manoj Sharma is a Medical student; he is completing his studies at SDM Medical college. It is great to see a highly professional guy is becoming a singer. Manoj Sharma's story will be an inspirational one for many as this lad is making an ideal example for many that you can do many things in life if you have the self-belief.

Manoj Sharma has sung in many competitions and won many prestigious prizes. He has performed with all the big names in music in Karnataka. He has worked as a voice-over artist for Colors channel, he never forgets to thank Keerthi Narayan, Srinivas prasad and Hamsa Vasistha and Roopa kotwal for this.

Manoj Sharma has been dubbing for discovery Kannada Channel; then he is the youngest voice-over artist of Viacom 18 Colors channel Karnataka. He has done more than 3000 voice overs just in a span of 2 years.

A trained Singer who works in multiple languages, Manoj Sharma is master in classical too; he has received awards such as Kala sourabha, supradaa kalaaniketana, gaana anarghya. He is also an IVRS voice actor/ voice-over artist in 28 Indian languages.

Manoj Sharma has given his performance in countries like Egypt, Singapore, Qatar, Dubai. He can sing in 8 Indian languages.

He debuts with the movie Manoratha, after that there is no looking back for him; he has worked in more than 150 Kannada films.

Manoj is part of three to four upcoming movies recently and he is a voice over artist for a Russian company. Manoj has won two national awards which is a great achievement. To win this, much at an early age need exceptional talent with the constant support of his wife Srividya. He was happy to perform at Ganesh Utsav in Bengaluru.