MIchael Saylor is best known for his long running tenure as the CEO of MicroStrategy, a publicly traded, global business intelligence company. Michael has also become widely known over the last several months for his frequent appearances on CNN, Bloomberg and other international outlets as one of the world’s leading experts on the evolving digital economy. Like his business pursuits, Michael’s philanthropy is also global. 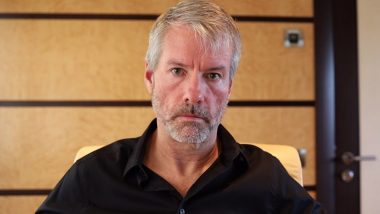 MIchael Saylor is best known for his long running tenure as the CEO of MicroStrategy, a publicly traded, global business intelligence company. Michael has also become widely known over the last several months for his frequent appearances on CNN, Bloomberg and other international outlets as one of the world’s leading experts on the evolving digital economy. Like his business pursuits, Michael’s  philanthropy is also global.

For the past decade, Michael has funded the build out of “Saylor Academy” - an online education initiative that offers learners around the world the opportunity to learn new skills at no cost. That’s right - the courses are completely free, which is a game changer for many.

“Michael’s vision is pretty straightforward. He believes that ‘education should be free’. That makes complete sense when you think about it”, says Jeff Davidson, Executive Director of Saylor Academy. “As Michael says, we need educated people to solve the world’s problems and advance society into the future. So why put up high barriers of cost, time and distance to the education that we need everyone to have?”

Saylor Academy’s courses are not just free, but also offer the chance to earn a free certificate which is very rare.  Many ask if the courses are truly free and wonder if there is a “catch.”  Davidson says the only “catch” is that “you have to put in the work to really learn the concepts taught in the courses in order to earn the free certificate. So there is an investment of time.”  An investment that is paying off for many.

Michael Sestak, based in the USA, also shared his praise for Saylor Academy’s ability to help people improve their career prospects, noting “[t]he curriculum is designed for students who want to get an edge on job offers. I highly recommend Saylor.”  Similarly, Sai Masetti of Tata Consultancy in India shared a positive experience after taking Saylor’s “Introduction to Supply Chain Management” course, praising the “[w]ell curated exam questionnaire similar to real world scenarios to apply the learning.”

Saylor is a top destination for learners in India, as an official Knowledge Partner of eSkill India, the skills training portal maintained by the National Skills Development Corporation. Several universities in India, such as Chandigarh University, also send their students to Saylor Academy for supplemental learning.

However, Saylor Academy’s reach is global with learners in 230+ countries and territories around the world. The National Training Agency of the Bahamas recently partnered with Saylor as part of it’s upskilling program and top academic institutions like Universitas Terbuka in Indonesia, Bangladesh Open University and Khurasan University in Afghanistan all recommend Saylor to their students as a trusted place to learn new skills.

Davidson says the reason Saylor has been able to gain so many partnerships around the world is that “these organizations can see the work and detail our team and subject matter experts put into building out the courses to provide a rigorous learning experience with real world use applications.” Employers are noticing. As Chisom Obiwuru, an HR professional in Lagos, Nigeria puts it “Saylor Academy is no joke.”  As Davidson notes, the site is not limited to university students or employees of certain companies.

Saylor Academy is open to all and its wide selection of courses in areas like computer science (e.g. Python & C++ coding, Software Engineering), business, English language and professional development offer terrific learning opportunities.  Saylor offers courses that can benefit learners in any career field of interest. With no costs required, all you have to do is be willing to put in the effort and have the discipline to learn at your own pace. That sounds like a pretty good deal!