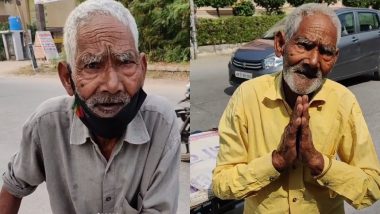 After the internet users came together to support Baba ka Dhaba and save his dying business during the lockdown, social media users are now extending helping hand to more people in need. An elderly man, Changga Baba, in Faridabad who has been struggling to make ends meet was found by internet users. The 86-year-old used to sell bhelpuri on the streets of Faridabad, but with COVID-19 induced situation he couldn't find enough customers making things difficult for him. After an internet user recorded him talking about his family which he has to take care of, people came forward in, to help the babaji. The video was taken opposite Sector 37 community centre in Faridabad. ‘Baba Ka Dhaba’ Is a Testimonial of Humanity: From the Power of Social Media to the Importance of Supporting Vocal for Local, 5 Things We Learn From the Viral Story of This Elderly Couple.

Instagram handle, The Great Indian Foodie shared a video wherein they handed over Rs 57,000 to babaji. The man handing over the money says that it was given by different individuals to support his family which has been finding it difficult during the lockdown. Changga Baba lives with his son who is paralysed. He lost his wife five years ago and is heard saying that his younger son also died. Babaji said that his daughter-in-law helps him, she works as domestic help and has three children. They together make an income of Rs 6,000 but the pandemic made their life worse. After Delhi's 'Baba Ka Dhaba', People Queue Up at Agra's 'Kanji Bada' Following Viral Video.

This made me cry

He is Changga baba Age 86 years he is working hard to survive life.his wife is not with him.Young son died and One son is paralyzed,

So faridabad vaale babaji handed over 57000 money collected in donations for him by The Grean Indian Foodie folks on Instagram. I think it's they who shared his video too. God bless these young rockstars helping the poor. See how elated he is@ManMundrahttps://t.co/it17bWPzeE pic.twitter.com/SdNCcLgpon

In the video, as the money is handed over, babaji can be heard saying that it will pay off the children's fees. He also blesses those who gave the money and returns home without waiting to do more business on that day. However, some people seem to have taken undue advantage of the situation by trying to make money for themselves in the name of Changga Baba. The Instagram handle posted videos telling people to be responsible during these tough times and not fall for everything which is being circulated on the internet.

(The above story first appeared on LatestLY on Oct 17, 2020 03:13 PM IST. For more news and updates on politics, world, sports, entertainment and lifestyle, log on to our website latestly.com).