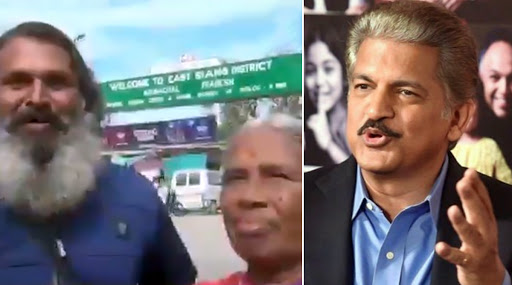 Mysuru, October 24: Indian Business tycoon Anand Mahindra is known for his philanthropic tweets and extending help to those in need. A few days back, D Krishna Kumar, a 39-year-old man from Mysuru won the hearts of netizens after he took his mother on an India tour on a 20-year-old Bajaj Chetak scooter. Reading his story, Mahindra boss wanted to offer a car so that he can drive his mother in their next journey.

Manoj Kumar, CEO of Naandi Foundation shared this story on Twitter which has caught the attention of thousands of netizen and one among them was Mahindra. Re-tweeting the story, he has expressed his desire to offer a Mahindra KUV 100 NXT car to the son in appreciation. Anand Mahindra Promises to Sponsor Indian Team Fan, 87-Year-Old Charulata Patel’s Tickets For All Team India Matches at ICC CWC 2019.

A beautiful story. About the love for a mother but also about the love for a country... Thank you for sharing this Manoj. If you can connect him to me, I’d like to personally gift him a Mahindra KUV 100 NXT so he can drive his mother in a car on their next journey https://t.co/Pyud2iMUGY

The Mysuru man left his job in January last year to show his 70-year-old mother holy places in India on his scooter. A year back, he realised that his mother has barely ever stepped out of home and decided to take the septuagenarian for a tour across India. Taking a year's sabbatical, he set off with his mother on an India tour.