Bobby Deol's Digital Outing with Aashram is the New Topic For Meme Makers; Netizens Welcome His Announcement with Amusing Reactions 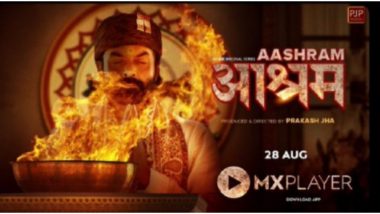 Even before Shah Rukh Khan's next production, Class of 83 starring Bobby Deol gears up for its premiere, the actor has already announced his second OTT outing with Aashram. The new MX Player series will star Bobby in the lead role and the teaser of which was recently unveiled by the show makers. The actor's new avatar coupled with a promising premise has gotten all his fans excited and their amusing reactions on Twitter are proof of it. Aashram: After Class of 83 on Netflix, Bobby Deol to Star in This Prakash Jha Web-Series (Watch Video).

Twitter is currently buzzing with Bobby Deol's name with his loyal fanbase rooting hard for his digital outing. However, not everything has to be serious, right? Bobby's new announcement has also paved the way for meme-makers to make new memes on his first teaser and we are being honest when we say, some of those are incredibly funny. Okay, so you don't believe us? Well, in that case, see them for yourself. Bobby Deol's Fanbase is Called 'Boobians' and Twitterati is Having a Hearty Laugh Over it.

It's a Major Announcement Guys!

When someone says he has not heard about,Bobby Deol's #Aashram

Bobby Deol is back with #Aashram

When bobby deol comes back

Who Else is Enjoying a Happy Dance?

Bobby Deol comeback in the industry with the movie #Aashram

The Excitement is Real

Everyone after seeing Sir Bobby Deol is coming back with his new movie#Aashram pic.twitter.com/Kyhw2hRWsY

All the Love and Luck

The Day's Here! Yes it is

Bobby deol!!! Loving to see you back #Aashram pic.twitter.com/5rsBquVgme

It's still unclear if Class of 83 will release before Aashram or after it but let's hope an official update on the same is out very soon. His upcoming OTT projects do sound intriguing and we know they would be worth all your time.

(The above story first appeared on LatestLY on Jul 31, 2020 05:32 PM IST. For more news and updates on politics, world, sports, entertainment and lifestyle, log on to our website latestly.com).