Bobby Deol fans have woken up finally and they are determined to make the Boobian trend work like crazy on Twitter. Oh, that's just a name that they have given themselves as Bobby admirers. 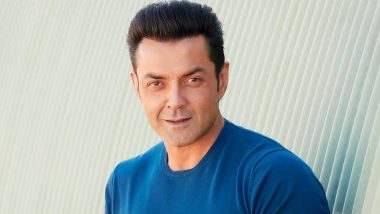 Yup, Bobby Deol's fanbase is called 'Boobians' and no, we aren't kidding. While Shah Rukh Khan fans take immense pride in calling themselves SRKians, we wonder if the choice of word by Bobby admirers was intentional or coincidental. Why would you call yourself a 'Boobian' when you have the liberty to pick something like Bobbians or even Bobbins! The Race 3 actor is currently trending on twitter for his weird or should we say kinky fan base and Twitterverse is busy trying to make some sense out of it. After Shah Rukh Khan’s Class of 83, Bobby Deol to Star in Prakash Jha’s Web-Series.

Imagine going on a twitter trend that reads 'Boobians'! While you go in with a naughty expectation, it certainly doesn't live up the hype. It's only when you check different tweets by the actor's admirers that you realise 'Boobians' is, in fact, a fan base dedicated to Bobby Deol and there's nothing scandalous about it whatsoever. Check out some of the tweets by both the sections - the Boobians v/s everyone else. This Video of Salman Khan Dancing to Gud Naal Ishq Mitha with Bobby Deol is Going Viral.

A Boobian Saying Bobby Deol is the God of Acting

Me tapping on the #Boobians to see if there is any boobie trend is going on.

Boobians Going all out with Their Love for Bobby

You Giving a Ramayan Spin to this Trend

When people are asking why Bobby deol is trending now on Twitter in India 😂😂😂#Boobians #Jaiboobians pic.twitter.com/Uk1BcOItIy

All They Needed was the Right Word

Political parties try so hard to make their agenda the no.1 trending topic on twitter and here we have the Bobby Deol fandom that manages to do this so casually uff #Boobians

Who Else Got Fooled?

Is this some joke that #Boobians are fans of Bobby Deol? Why Boobians? I thought they are fans of boobs.

Today is a day to remember when Bobby Deol is trending more than Sachin Tendulkar. Appreciate the greatness. #boobians pic.twitter.com/vFeVDHyMad

When you think #boobians is about boobs pic and instead Bobby Deol pops up . pic.twitter.com/y6X8krFqQQ

I saw this trending #Boobians

Imagine my disappointment, its about bobby deol pic.twitter.com/SAgJgmy27a

Were you amongst the ones who got disappointed after learning the real meaning of this trend? Or are you one of the Boobians present on the Twitter currently? Do send in your reactions by tweeting us @latestLY. We're waiting.

(The above story first appeared on LatestLY on Apr 24, 2020 07:25 PM IST. For more news and updates on politics, world, sports, entertainment and lifestyle, log on to our website latestly.com).