Canada Day 2020: From Abundance of Forests to Doughnuts, Fun Facts About Canada That Prove Why It's Such An Incredible Country! 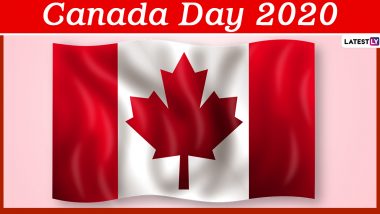 Canada Day is an important national holiday in the North American country of Canada, a former British territory. Celebrated on July 1 annually, it was on this day that a constitution act joined the provinces of Nova Scotia, New Brunswick and Canada Province into one single country. This constitution in no way granted the native countrymen freedom from the British rule up until 1982. This was due to the fact that there was no spirit of Canadian patriotism which only started to grow from the 100th anniversary of the Dominion Day in 1967. With the signing of the historic Constitution Act by the Queen Victoria in 1982, Canada ceased to exist under the ambit of the UK and had its own independent constitution with all powers. Canada Day 2020: History And Significance of Day Celebrating Journey of Unison of 3 Separate Colonies Into A Free Country.

These were some interesting facts about Canada which gives glimpses of why  it is a prosperous, peaceful country which makes it a hot pick for migrants all around the world to settle there.

(The above story first appeared on LatestLY on Jul 01, 2020 12:59 PM IST. For more news and updates on politics, world, sports, entertainment and lifestyle, log on to our website latestly.com).