Canada Day 2020: History And Significance of Day Celebrating Journey of Unison of 3 Separate Colonies Into A Free Country 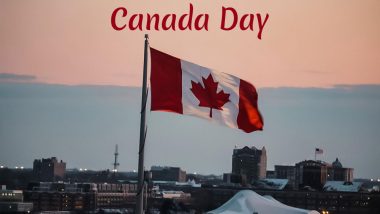 The national day of Canada is celebrated each year on July 1. In 1867 -- on this day -- three separate colonies of the province of Canada, Nova Scotia and New Brunswick were united into a single Dominion within the British Empire called Canada. Referred to as Canada's birthday, 'Canada Day was initially known as 'Dominion Day'. It was renamed as Canada Day after Canadian Constitution was patriated by the Canada Act 1982. This year Canada Day will not be celebrated in a grand manner due to COVID-19 pandemic.

Canada Day is not just a holiday in Canada, but it is the anniversary of an important national milestone on the way to the country's full independence. On July 1, 1867, Canada gained an increased level of political control and governance and became a 'kingdom in its own right' within the British Empire,  commonly known as the Dominion of Canada. Canada Day 2020 Fireworks Live Streaming Online For Free: Where and How to Watch the Virtual Events to Mark This Year’s Dominion Day.

Until 1931, Canada succeeded in attaining increased level of political control and governance over its own affairs, but its foreign affairs, national defence, and constitutional changes were still managed by British Empire. With the passage of the Statute of Westminster in 1931, Canada gained more independence over the years. However, with the passing of the Constitution Act, 1982, Canada became completely independent.

The British North America Act, 1867 -- also called Constitution Act, 1982 -- is the basis on which Canada was confederated on July 1, 1867. It was then designated as Dominion Day, stating that Canada was still under the rule of British Empire. The celebrations were started after the Governor General the Viscount Monck issued a royal proclamation asking for Canadians to celebrate the anniversary of Confederation in 1867. However, larger celebrations were not held till 1917.

With years passed by, politics and debates on Dominion Day gained momentum. On October 27, 1982, the holiday's name was officially changed to Canada Day after it attained Royal Assent. Following the Royal Assent, the anniversary of Confederation, Dominion Day, and later Canada Day was set as date for a number of important events. In 2017, the Bank of Canada released a commemorative $10 banknote for Canada's sesquicentennial on the 150th anniversary of Canada.

The Canada Day has been set as national holiday. On this important day, the Canadian Broadcasting Corporation's cross-country television broadcast began in 1958, the Order of Canada was inaugurated in 1967 and the country's national anthem 'O Canada' was established in 1980.

Celebrations of Canada Day have no standard mode, as per Jenifer Welsh who is professor of International Relations at the University of Oxford. She states that "Canada Day, like the country, is endlessly decentralised. There doesn't seem to be a central recipe for how to celebrate it—chalk it up to the nature of the federation."

However, on this day, most communities in Canada host organised outdoor celebrations including parades, carnivals, festivals, barbecues, air and maritime shows, fireworks, and free musical concerts. In the national capital Ottawa, large concerts and cultural displays are held on Parliament Hill in the event which is popularly called "Noon Show". Internationally too, Canada Day is celebrated, like at the Bund Beach by the Canadian Chamber of Commerce in Shanghai and at Canadian International School in Beijing by the Canada China Business Council.

(The above story first appeared on LatestLY on Jun 30, 2020 07:16 PM IST. For more news and updates on politics, world, sports, entertainment and lifestyle, log on to our website latestly.com).