CBSE Results 2020 to Be Declared on July 11 and 13? Students Flood Twitter With Funny Memes and Jokes After Fake Notice of Board Exam Result Dates Goes Viral 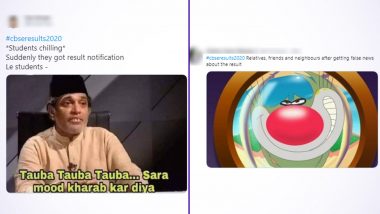 It was a nail-biting moment for students across India, when a notification of the Central Board of Secondary Education (CBSE) began surfacing online. The notice claimed that CBSE 10th and 12th board exam results would be declared on July 11 and July 13, respectively. Tension soon began to captivate candidates who were although waiting for the result declaration, but never expected to be out so soon. CBSE official later clarified that it was fake news and the board exam result 2020 dates are yet to be confirmed. As the claims were rebuffed by the board, students flood their Twitter timeline with funny memes and jokes as the fake notification of board exam result began circulating on social media. CBSE Class 12th, 10th Results Not to Be Declared on July 11 And 13; Circular Going Viral on Social Media About Result Dates is Fake.

The circular with the false claim making rounds on the internet was used by various media outlets, including news agency ANI, who later retracted the story and said the release was incorrect. The notification claimed that because of the increasing demand, the board decided to declare the results sooner. “The results of students of class XII will be available on 11.07.2020 by 4 p.m. latest. The results of class X students will be available on 13.07.2020 by 4 p.m. latest,” read the false notification. CBSE Public Relations Officer (PRO) Rama Sharma informed the media outlets that the notice circulated on social media regarding CBSE result dates is fake.

The moment it was announced that the notification is fake, students began to trend #CBSEResults2020 with funny memes and jokes. The false notification gave all the feels to the students as they wait for the results, but are worried about the scores too. In this article, we bring you the best reactions to the fake notice making rounds on social media.

CBSE results of 10th and 12th class will be declared on 12th and 11th july respectively.

Meanwhile, Relatives Were All Ready

#cbseresults2020 Relatives, friends and neighbours after getting false news about the result pic.twitter.com/S1rAhNAuqm

When people ask my result #cbseresults2020

Because Results Will Be Out Soon

It Was A Fake News

Suddenly they got result notification

On a serious note, students must know that CBSE has not yet decided dates as to when they would declare the results for both class 10 and class 12. As of the information available, the board is likely to release the scores by July 15, but it might delay as well. No CBSE result date 2020 has been confirmed by the board, as of yet.

(The above story first appeared on LatestLY on Jul 09, 2020 05:34 PM IST. For more news and updates on politics, world, sports, entertainment and lifestyle, log on to our website latestly.com).