Challenges of IVF: This Picture Of Baby Surrounded by Syringes Tells a Touching Story!

Patricia, the mother wanted to document the fertile journey and they did not expect the photo would go so viral. 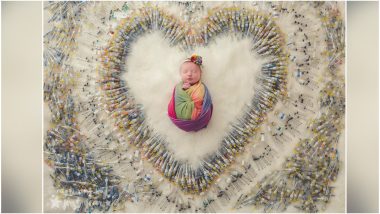 The process of In vitro fertilisation (IVF) is not an easy one and to depict the very challenges involves, a mother found the best way to showcase it to the world. A picture clicked of her baby and the number of syringes it took for her to make the little child was posted online. The photo of newborn surrounded by IVF syringes in the shape of a heart has gone viral on social media. The picture is of her two-week-old child in the middle of over hundreds of syringes, the process her parents had to go through. Canadian Doctor Accused of Impregnating 11 Women With Own Sperm Through IVF.

Samantha Packer of Packer Family Photography shared this picture with the story of the mother. Within days of posting the picture, it got 73,000 likes, 57,000 shares on Facebook. The picture told the family's story in the caption. It read, '4 years, 7 attempts, 3 miscarriages and 1,616 shots.' The child's parents, O'Neills had to go through the tedious times to welcome their baby in this world. The picture is made up of two rings, the thinner ones her mother used to take twice a day and the outer ring shows the IVF injections that she took. It is spectacular how this picture depicts the challenges but also gives hope.

Take a look at the picture of the Newborn baby surrounded by IVF syringes:

Patricia, the mother wanted to document the fertile journey and they did not expect the photo would go so viral. While talking to CNN she said, "I hope that there's a couple out there that's going through what we are that can see that there's hope at the end of the tunnel. There's a light and you just have to get there." It is indeed incredible of Patricia and her partner Kimberley to have made this possible through it all. Attention To-Be Moms! Heating Food in Microwave Can be Harmful.

The couple lost one baby at 6 weeks, the other one at eight weeks. They tried to make a third embryo that also did not work. Over and over they had 7 attempts. "I was done and I couldn't do it anymore. But my wife and I, we started this journey together, and we decided we would always be together in the hard decisions and she wasn't done," said Patricia. They have done it and welcomed their no less than a miracle baby on August 3. This picture serves to tell their journey of all ups and downs, but the success at the end of it. The picture has received many heart-warming comments, definitely serving hope to many other families who are dealing with infertility.

(The above story first appeared on LatestLY on Aug 19, 2018 10:25 AM IST. For more news and updates on politics, world, sports, entertainment and lifestyle, log on to our website latestly.com).