An 'amorous' couple was allegedly caught kissing on an AirBlue flight on May 20. Eyewitness lodged a complaint against the air staff for not stopping the kissing couple. 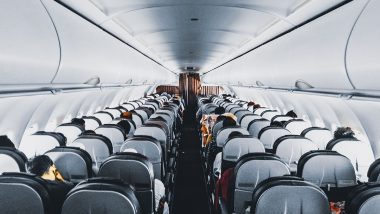 A couple was allegedly caught kissing midair on PA-200; a Karachi to Islamabad bound Airblue flight on May 20, 2021. The incident was reported by a passenger who was on board and it created a lot of ruckus inside the aircraft. According to the other passengers on the Airblue flight, the couple's indecent behaviour made others uncomfortable. According to The Express Tribune report, Mr. Bilal Farooq Alvi is the eyewitness of the kissing couple as he was seating next to them on the respective flight.

Mr. Alvi told the news portal that the couple was sitting in the front row and was kissing each other publicly.“When some fellow passengers complained to the air hostess, she warned them but they continued with what they were doing,” he added. Mr. Alvi also said that the air hostess then provided them with a blanket to keep their displays of affection under wraps. But according to Mr. Alvi, while leaving the plane, the agitated couple said, “You don’t have any right to interfere in someone’s privacy.”

According to the Tribune report, for not taking action to stop the couple, advocate Bilal Farooq Alvi has lodged a complaint with the Civil Aviation Authority (CAA) against the airline staff. The incident has caused a lot of uproar on social media too. Netizens' reactions to the incident are extremely funny.

First Take a Look at the Video of Mr. Bilal Farooq Alvi Here:

An 'amourous' couple was allegedly caught kissing each other on an causing an uproar on a domestic Airblue flight.

Air-host to other Passengers after giving blanket to kissing couple on #AirBlue pic.twitter.com/OqtwTxoiJw

Advocate Bilal Farooq Alvi boarded the flight with his family when the incident took place. Now reportedly, the authorities are currently probing the matter.

(The above story first appeared on LatestLY on May 26, 2021 05:08 PM IST. For more news and updates on politics, world, sports, entertainment and lifestyle, log on to our website latestly.com).