Dr Faheem Younus, Working at the Forefront Amid COVID-19 in the US, Has a Message For Indians, Pakistanis, Americans And The World As He Gets Trolled; Check Tweets 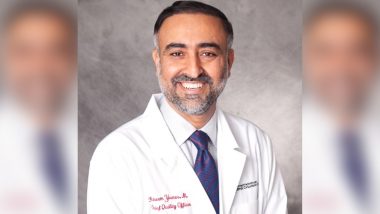 Doctor Faheem Younus who works in Bel Air, the United States as a frontline warrior has taken to Twitter saying that he receives hate tweets from all quarters aiming at his beliefs and cultural identity. He has explained the hate he receives for his ethnicity and religious beliefs. While working at the forefront amid COVID-19, he took to Twitter explaining how he is trolled by people belonging to different countries and religious backgrounds. Younus in a series of tweets wrote, "Indians for being a Muslim, Pakistanis for being an Ahmadi, Americans for being Scientific, Others for being an American! While the doctor says he "embraces all ethnicities, there is a little talking needed on the topic. Indian Doctor Vedang Desai Tweets His First-Hand Experience Inside Exclusive COVID-19 Testing and Treating Facility; Says ‘With Each Negative Result, My Smile Widens Mile-Long’.

Addressing Indians he says one should be judged on the basis on their faith. Younus shares it with a video of friends who got separated during the India and Pakistan's partition. However, the friends who are of different faiths, one is Hindu and the other being Muslim, meet with the help of technology.

Dr Faheem Younus on Hate From All Quarters:

Giving COVID tips to all. Yet getting hate from...

...Indians for being a Muslim

..Pakistanis for being an Ahmadi

.Americans for being Scientific

Others for being an American!

I embrace ALL my ⬆️ identities & don’t need pity. But we need to talk:) Read till end..

2/6: Dear Indians, pandemic is a sobering time. Who lives, who dies, who knows. Let’s be kind

Don’t judge people by their names; don’t judge a faith by its nutcases. Broad brushing any large group is a bad idea. Watch below for a ❤️ perspective ⬇️ https://t.co/j8LTM1GKGV pic.twitter.com/gIrNDN8XMN

In the third tweet addressing Pakistanis, he tells people of his motherland to grow and learn by facts and to not believe in propaganda which is merely for political gains. He posted the tweet with a video of Pakistani poet Ahmad Faraz reciting his poem.

Tweet Addressing Pakistanis to Not Fall For Political Propaganda:

3/6: Dear Pakistanis, my motherland, we’ve been fed sectarian myths for political gains. Those myths can also be busted by learning the facts instead of believing in propaganda. We have more in common...

We have a choice. Why not learn more, hate less?

The next tweet questions Americans who are politicising a virus over "facemasks or hydroxychloroquine". He tells the people to not question scientists who are trying their best to create a vaccine for this disease.

4/6: Dear fellow Americans, there’s no point politicizing a virus over its mortality or facemasks or hydroxychloroquine

We’re fortunate to have the world’s best scientists. How unfortunate to distrust and not defer to their expertise?

To Those Who Judge Him For Being an American:

The doctor addresses people who hate him for being an American, he tells them to not judge them by politics or COVID management, instead visit the US to meet Americans and knows its people.

5/6: To those who hate just because I’m an American, don’t judge us by our politics or our COVID management. Neither is good:)

But come visit the US and you’ll see how magnanimous the people are and how free the air is.

I hope America helps the world with treatments/vaccines.

Haters are more than plenty on social media platforms and addressing them, Younus says to stop the hate as they are few.  He ends by saying that he wishes health and prosperity to everyone.

Here's Something to People Who Will Hate No Matter What:

6/ MOST IMPORTANT: Haters are few. A large majority from all nations is smart, generous and loving. I see you. I feel you. I thank you!

For others who “other” me, I wish you health and prosperity. May God protect you and your loved ones.

“Love for all, hatred for none.”

Younus' tweets were quick to go viral with tweets supporting the doctor for his viewpoints. One of the Twitter user wrote, "Sir, I am an Indian and feel proud that someone humane and sensible like you comes from my neighbourhood. Only and only love and respect for you, and everyone like you doing the biggest service to humanity in the present times." Many such tweets thanking the doctor for sharing his heart at such a crucial time have flooded his comment box.

(The above story first appeared on LatestLY on Aug 08, 2020 03:16 PM IST. For more news and updates on politics, world, sports, entertainment and lifestyle, log on to our website latestly.com).