Fact Check: Did James Anderson Use Saliva on Ball During England vs West Indies 1st Test 2020? Here’s What Actually Happened 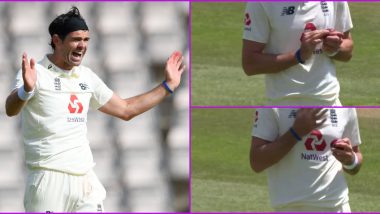 England and West Indies played the first International cricket match after the COVID-19 break at the Ageas Bowl. The Test, which West Indies won by four wickets, is part of the three-match series being played behind the closed doors in the bio-secure environment. After the coronavirus pandemic, ICC (International Cricket Council) banned the use of saliva on cricket ball to prevent any chance of the virus being spread. However, all the players participating have tested negative for COVID-19. Jermaine Blackwood, Shannon Gabriel Star As Windies Beat England by Four Wickets.

With saliva ban in place, fans on social media were seen passing on footage in which they alleged England fast bowler James Anderson applied saliva on the ball. However, in the footage, it is not clearly visible whether Anderson applied saliva or sweat to shine the ball. It must be noted that, fast bowlers depend on shining the ball to extract more swing. And before coronavirus, it was a usual practice. ENG vs WI 1st Test 2020: Viv Richards, Ian Bishop, Dwayne Bravo and Other West Indies Legends Laud Jason Holder’s Men for Memorable Win.

James Anderson applying saliva on the ball during the match.

Please ban him for three test matches against Pakistan.#EngVsWi pic.twitter.com/F7zvdql2Oh

However, official broadcaster came up with replays, and it was confirmed that Anderson was applying sweat on the ball, not saliva.

Former England captain and commentator Nasser Hussain further cleared the air and said, “I just want to try and clear something up, we’ve had quite a few tweets in saying ‘Have they seen or are Anderson and Archer putting saliva on the ball?”

“Obviously you’re not allowed to do that. Just be careful of the close-up angle. From this angle it looks like Anderson’s gone to his mouth to put saliva on the ball, he then goes to shine it, but I’ve done some more work as a director and got our cameramen just to pan out a bit and show that actually he’s going to his sweat on the brow to shine the ball. Same with Archer, he’s using his shirt, from the close angle it looks like he goes to his mouth to shine the ball,” Hussain added.

No, Anderson was actually putting sweat from his forehead on the ball.

(The above story first appeared on LatestLY on Jul 13, 2020 04:49 PM IST. For more news and updates on politics, world, sports, entertainment and lifestyle, log on to our website latestly.com).