Fact Check: Does Manforce Have Biryani-Flavoured Condoms? Know Truth Behind The Ad That's Getting Funny Reactions on Twitter 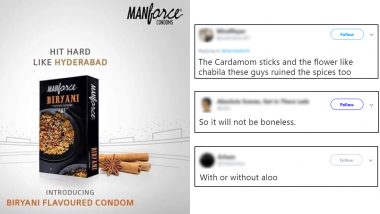 The internet is full of funny images that keep getting shared along and go viral. But not all of these are backed by truth or facts, even though they are made to look real. Currently, a picture of an ad by Manforce condoms about their Biryani-flavoured condoms has become a thing of interest. Someone shared the ad of this Biryani-flavoured condom packet on Twitter and since then it has got amusing reactions. And while there are many weird flavoured condoms that are available, the Biryani-flavour was just a prank by the condom manufacturer company. There is no such flavoured condom available in the market, it was an April Fool's prank which has once again come up.

The thought of Biryani-flavoured condom would definitely make many people squirm. So when an image of Manforce's Biryani-flavoured condom packet was shared online, many thought it is believable. The ad read, "Hit hard like Hyderabad." Manforce has in the past introduced an Achaari flavoured condom too, but the Biryani one does not exist. It was an April Fool's prank from the year 2019. The old picture of the ad has come up on Twitter again and while some people had serious doubts, others gave certainly funny reactions.  Chicken Tikka Masala to Cannabis, These Are 8 Weirdest Condom Flavours That Will Make You Glad You Came.

I love Biryani,Hyderabad and sex obviously but it's a puking mixup 🤮🤮🤮 pic.twitter.com/Hoyz2wSkFy

Ruining the Spices Too

Is it chicken biryani or Mutton Biryani ??

See What You Did There?

So it will not be boneless. https://t.co/k1Rzh65uMw

Will There Be Aloo?

With or without aloo https://t.co/0wNd9VLuAe

For your chota elaichi. pic.twitter.com/SeCdACoELV

Here's the Original Tweet by Manforce Which Was a Prank:

While this was clearly an April Fool's joke, we don't blame you, if you thought it was real, since there are some weird flavoured condoms that are available. Other companies have condoms like Kala Khatta and Meetha Paan! Clearly sexual fantasies and foodgasm are coming together to give people pleasure!

(The above story first appeared on LatestLY on Jan 20, 2020 02:10 PM IST. For more news and updates on politics, world, sports, entertainment and lifestyle, log on to our website latestly.com).