Hyderabadi Biryani to Burn Calories or Add Them? Manforce Condom & Zomato Have a Funny Exchange on April Fools’ Day Joke

Is litti chokha the next condom flavour? We will have to wait for the next April Fools'. 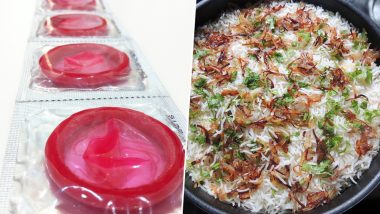 Brands have some really fun yet predictable ways to celebrate April Fools and especially when it comes to condom brands, they come up with the weirdest campaigns that you can imagine. This year, Manforce came up with Hyderabadi biryani flavoured condoms, which was eventually revealed to be a prank. The condom company's tweet read: "Hyderabad in the field, Hyderabad in the sheets. Introducing Manforce Biryani Flavoured Condom. #ManforceCondoms". And then Zomato replied to their tweet in the most unexpected way! April Fools' Day 2019: Vijay Mallya Shares Kingfisher Instant Beer, Radler, and IPL Prank Videos, Tries to Fool Indians; Don't Fall For Him Again.

Please! This is not what we meant by foodgasm.

To address Zomato's dig, Manforce replied in the most hilarious way.

A meal that burns calories instead of adding them? 😏 Imagine those midnight cravings.

It just promotes "dinner before bed" !

Biryani masala is good only for eating pic.twitter.com/N4QslC3ACa

Please launch Kamla Pasand Flavoured too for UP

Sometimes you really need such conversations to brighten your day. We really wonder what other flavours, rather April Fools' condom flavours are we going to witness. Is litti chokha flavour next?

(The above story first appeared on LatestLY on Apr 04, 2019 09:49 AM IST. For more news and updates on politics, world, sports, entertainment and lifestyle, log on to our website latestly.com).