Fact Check: Viral Video of MiG Aircraft Landing on Dam Is Not Real! Stunning Animation Is Created With Help of Digital Combat Simulator

Several social media users were mesmerised by the stunning view of the MIG aircraft making its way through the mountainous region and making a stunning landing on a dam. However, it is not a real video but an animated one. 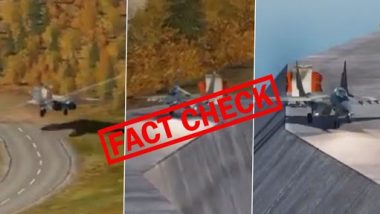 New Delhi, July 12: Fake news on social media platforms has become an issue of grave concern for people as well as the government as it has the power to mislead the masses. One such animated video of the takeoff and landing of a fighter aircraft, claiming it to be a MiG aircraft, on a dam went viral and was widely circulated on social media platforms including Facebook and Twitter. Several social media users were mesmerised by the stunning view of the aircraft making its way through the mountainous region and making a stunning landing on a dam.

In a Twitter post, RPG Group chairman Harsh Goenka shared the video with the caption, “Incredible”. Several other users on Facebook, also shared the animated video thinking that the video was a real one. A close look at the viral video that took netizens by surprise shows the fighter aircraft making a smooth landing on a narrow dam. The video shows the aircraft taking off in a skilled manner, boasting of its amazing skills. Furthermore, a Facebook post by a social media user named Hemant Desai has shared the same video and captioned the viral animated video saying,  "Beautiful landing by a MIG aircraft on a dam and even more stunning is its take-off".

After the video of the aircraft went viral on social media, a fact check was done by India Today following which clarification was issued saying that the video was not a real-life video but an animation. It had been created with the help of Digital Combat Simulator (DCS), a free-to-play combat flight simulation game. The report further informed that the authenticity of the video could be challenged on the most obvious hint which can be noted at 0.52 seconds when the parachute, which is at the back of the jet, disappears suddenly.

Yes, This is DCS digital combat simulator game. cpt VLK a U-tuber posted it on Oct 2020.

Another user on Twitter shared the same video claiming that the video was made using a DCS digital combat simulator game. He said Cpt VLK, a YouTuber had posted it on October 2020. The Digital Combat Simulator, or DCS, is a free-to-play combat flight simulation game. It is developed primarily by Eagle Dynamics and The Fighter Collection. Released in 2008, it was originally an evolution of Lock On: Modern Air Combat by Eagle Dynamics and The Battle Simulator by The Fighter Collection.

The stunning video showing an incredible landing and takeoff by a fighter aircraft on a dam is the MiG aircraft boasting its amazing skills.

The video is not real as the animation is created with the help of Digital Combat Simulator (DCS), a free-to-play combat flight simulation game.

(The above story first appeared on LatestLY on Jul 12, 2021 08:00 PM IST. For more news and updates on politics, world, sports, entertainment and lifestyle, log on to our website latestly.com).