Fish With Human Face and Sharp Teeth Found in Malaysia Will Freak You Out! Know More About This Species of Triggerfish (View Pics and Video)

Pictures of the weird-looking fish were shared on Twitter and no doubt they have freaked people out. But is it a one-time weird cloned fish or that's its regular appearance? The fish in question is named Triggerfish and its appearance has a lot to do with its name. 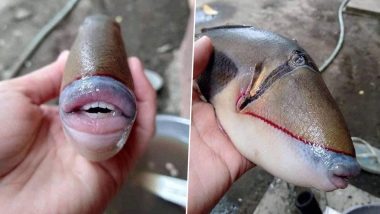 The deep sea is full of mysterious creatures and fish types that most of us are not even aware of. So once in a while, when these creatures show up, they freak us out. Now a fish with a clearly human-like jaw and sharp teeth has been spotted in Malaysia. Pictures of the weird-looking fish were shared on Twitter and it is no wonder that people are freaked out. But is it a one-time weird cloned fish or that is its regular appearance? The fish in question is named Triggerfish and its appearance has a lot to do with its name. Because the very humanly looking jaw can definitely trigger a person. We tell you more about this fish. Fish From China With a Human-Like Face Goes Viral on the Internet! Netizens Freaked Out (Watch Scary Video).

Pictures of this fish came up on Twitter about a week ago. A Twitter user posted the video with a caption that translated, "Her lips are hotter than mine." The fish has teeth just like a human, which makes its appearance even scarier. The pictures have gone viral and people have reacted with funny memes and GIFs in the comments. But the question remains, is this for real? Yes, it is. It is Triggerfish that lives in the coral reefs habitat, found especially in the Indo-Pacific oceanic region. Are These The Weirdest Sea Creatures Ever Seen? Russian Photographer Shares Underwater Pictures from Atlantic and They Are Creepy!

Check The Viral Pics of Fish With Human Face:

The pictures have over 13,000 likes and some netizens have the funniest reactions. Check some replies.

The Fish Did Makeup!

and that's on bloop bloop pic.twitter.com/UFmL5K324R

Some commented confirming that it is triggerfish. By the looks of it, it sure triggers, is it dangerous?

Triggerfish: These are coloured fish which have a habitat in the subtropical oceans and coastal habitat of coral reefs. The triggerfish is found in Malaysian waters, especially off the east coast and around Borneo – including the coral reefs of Redang, Tioman and Sipadan. They are very ill-tempered. Their head is large and has a strong-jawed mouth with teeth. Their eyes are far away from the mouth, nearly at the top of their head (as you can see in the pics above). Each jaw contains a row of four teeth on either side, while the upper jaw contains an additional set of six plate-like pharyngeal teeth. They feast on crustaceans, mollusks, sea urchins and creatures with protective shells and spines. They get aggressive while protecting their eggs and can carefully defend them even from human intervention, like the scuba divers. The titan triggerfish pose a serious threat to divers because they have powerful teeth.

Clearly, one of the creepiest species of fish we have come across in a while. There are many weird sea creatures that keep making their appearances but this one with its sharp teeth is too scary.

(The above story first appeared on LatestLY on Jul 10, 2020 02:21 PM IST. For more news and updates on politics, world, sports, entertainment and lifestyle, log on to our website latestly.com).